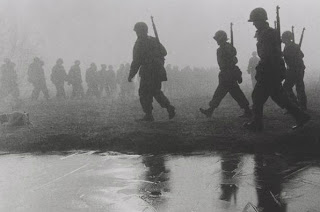 This is the first entry of a series of rules for various weather condition in our games of BGWWWII.  Most of these rules are mods off the rules from Easy Eight's so be sure to check out their excellent BGWWII rules.
FOG:  Fog is a collection of liquid water droplets or ice crystals suspended in the air at or near the Earth's surface.  In fact, fog is distinguished from mist only by its density, as expressed in the resulting decrease in visibility.  Fog acts exactly the same during the day and night and will still hamper the visibility of anything inside it.

Special Rules:  Fog will triple all Awareness Check’s scores and the range of any Sighting Checks performed within it.  Light sources are also reduced to ¼ of its normal luminance due to the fog’s cloud.  Light sources will only be seen as the source if within 6” of the viewer otherwise it will only be as a glow within the fog.  Any shooting to this flow will be at ½ To Hit if not within 6” of the light source.  Anything not within 6” of the viewer will be seen as a shadowy form so the viewer will not be able to tell a man carrying a machine gun from one with a flamethrower and vehicles can only be recognized by their size characteristic and possibly their sound to an experienced listener.  It is common for light rain or light snow to be found within fog so refer to those rules if applicable.  Fog doesn’t impede on any piece’s movement other then its ability to see and will also provide no cover modifiers when within in.  When fog is present, it will cover the entire battlefield until the scenario or Battle Master (BM) changes it.

Be sure that's the enemy before you pull the trigger,
Brian
Posted by Weird WWII at 9:25 PM