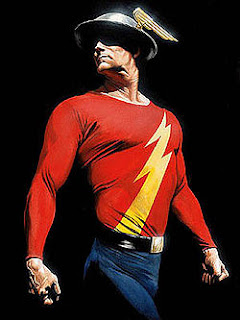 Well I've been play testing my rules for the Flash and this guy is just a beast!  His bio says he can move at the speed of light and can even vibrate through solid objects so this makes him crazy deadly.  I have him rolling a D20+5 actions per turn with a movement of 30" per action to represent a reasonable rate of movement on the battlefield.  The slower rate is due to all the lead and shrapnel flying around which makes him run at a much slower rate to make sure he can spot the dangers before he is exposed to them and keeping from running into it on accident.  I made it to where he has to make a Skill Check for every action of movement in any terrain that causes a movement modifier so he doesn't trip up.  If he fails he will stop moving and trip and land D6" in the direction he was moving with a H column hit.  When moving he can only use Sighting Checks and Skill Check to his front 90 degrees.  If he performs an action during his movement it will be at a 1/2 Skill Check or To Hit.  Because of his movement, he can only fire weapons at targets at Point Black range in fear of running into the bullets as he outruns them.  I also said that he has to be stationary then pass a successful Skill Check to Phase through something.  He cannot be defeated in close combat unless fighting another speedster or some other extraordinary opponent.

With all that he was able to destroy a King Tiger (by phasing a couple grenades into the hull) and wiping out 2 squads of panzergrenadiers in less then 20 actions.

Any thoughts?  I want to try and stay true to the bio but he may just be to Flashy for the tabletop.

Let me know what you think,
Brian
Posted by Weird WWII at 2:00 PM 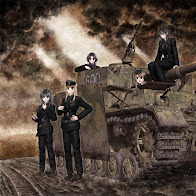