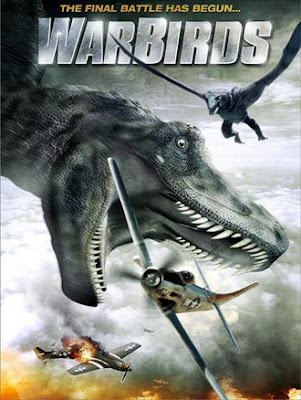 A WAC crew manning a B29 is forced to land on a deserted island in the Pacific only to discover that it is crawling with Japs and something more dangerous, flying CG dinosaurs!  Warbirds is about your normal Sci-Fi Channel original movie fare, well maybe a bit worse then normal.  Although it is bad, it isn't SS Doomtrooper bad but its close.  So if you like your acting bad, budget low, story shitty and your dinosaurs CGed then Warbirds is your waste of time.  Because it is so bad, I couldn't find an official trailer but I did find a fan-made one so take a look at the poor man's effort below.


Don't let the pic fool ya, there are no Mustangs, Skyraiders or T-Rexes in the flick but they did get the clouds, fire and that flying thing down perfectly.
Brian
Posted by Weird WWII at 12:00 PM