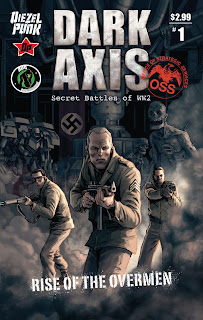 A hard American NCO is tasked with scouting out a lonesome rural valley in what looks like a quiet part of the war but two things will test his mettle, the worthless GIs under his command and the lethal enemy that stalks them in the darkness of the Nazi advanced weapons plant that they have stumbled across.  Admittedly, I have not read this book as of yet but if he writes like he directs, this Diezel Punk WWWII comic by Greg McLean will surly be violent and bloody as hell!  Swing down to your local comic book shop and see what you think.

Lots of Aussies in the WWWII genera of late,
Brian

PS
Since the writer is a film director he did up a short teaser for the comic called Project Lazarus.
Posted by Weird WWII at 1:18 PM