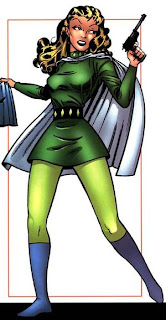 Notes:  This is the Golden Age Human Torch's arch-villains and a fun character to do battle with him and Toro with.  Be sure to get a copy of the core BGWWII rules so you can throw down this this HOT lady.
Origin:  Victoria Murdock was the sister of the racketeer “Killer” Murdock and a scientist whose expertise was in flame retardant materials like asbestos.  Murdock used her brother and his contacts to become a criminal scientist and she developed asbestos-lined clothing for her and her clients that would protect them from the flamethrowers they used to commit their crimes.  These weapons were perfect for their crimes because it was terrifying to behold and could be used to burn down the crime scene so any evidence would be destroyed in the fire.  To improve on her inventions, Murdock located Fred Raymond who was another scientist in the field of fire retardant research.  Murdock wanted Raymond to help her create a suit that would surpass her own design so that she may battle the superhero, Human Torch.  Before Murdock could kidnap the Raymonds, they were saved by the timely interdiction of the Human Torch who was keeping the Raymonds under surveillance just for this exact reason.  Dealing with her cronies, the Human Torch failed to capture Murdock but saved the Raymonds.  Enraged, the Asbestos Lady trailed the Raymonds and when they were on a train, she placed a tree on the tracks that derailed it and caused it to exploded and catch fire.  Thinking the Raymonds and their son dead, she fled the scene.  She would later come to find that the young son of the Raymond’s survived and was a top act at a local circus.  The young man was able to manipulate and encase himself within flames without any injury.  Murdock wanted to use this boy as a weapon in her life of crime and went to the circus to abduct him.  Seeing that the boy had powers like his own, the Human Torch went off to speak with the young man and came face to face with his old enemy, Asbestos Lady.  The two ran into each other and in the ensuing battle the Asbestos Lady was defeated and the Human Torch would become ward of the young Raymond later to be known as Toro.  After her release from jail, the Asbestos Lady was approached and backed by a group of crooked businesses men who employed her to try and take out the Human Torch and Toro so they would stop interfering with their criminal plans.  But it wasn’t until the capture of her brother by the flaming duo and his later execution that the Asbestos Lady made it her goal in life to kill the two who she blamed for her brother’s death.  Asbestos Lady will do just about anything to exact her revenge.  Anything.
Name:  Victoria Murdock
Rank/Title:  Criminal/Scientist
Nationality:  United States of America
Affiliations:  Various underground criminal organizations
Base of Operations:  United States of America
Height:  5’ 10”
Weight:  136 lbs
Eyes:  Brown
Hair:  Blonde
Actions:  The Asbestos Lady has two actions per turn as normal.
Senses:  The Asbestos Lady acts like anyone else when making any sensory-based tests.
Strength & Toughness:  Murdock has the normal strength and toughness for a woman of her size that regularly engages in physical activity.
Movement:  Victoria can move the normal rate per action as per the normal rules.
Training:  Murdock is a brilliant scientist in the field of flame retardant materials and has also been trained in the complexities of organized crime from her brother in the field of racketeering, bank robbery and other sorts of criminal activities.
Leadership:  The Asbestos Lady is considered a 12-2 Criminal Mastermind and is considered to have a 10” Command Range when accompanied by any hired gun thugs.
Weapons & Equipment:  The Asbestos Lady is fitted with a suit that is created from asbestos and other fireproof materials.  This suit prevents her from suffering from any type of flame weapons and knowing this she is also immune to any psychological effects that a flame weapon might produce.  The suit does have a limit to its protection but it has never failed her with all her encounters with the Human Torch and Toro so it is assumed that unless she is caught in a Nova Burst, she will be immune to any fire-based attacks.  Murdock is also armed with dual handguns that fire asbestos bullets.  These bullets will act as normal against any flammable living target with a –1 to the effects result.  It is also believed that she has modified a SMG to use with her special bullets as well.
Hatred:  Because of her brother’s apprehension and then subsequent execution, she blames the flaming due for his “murder” and thus will always fight with the No Quarter rules when battling them.
Criminal Mastermind:  Victoria is considered a Criminal Mastermind that allows her to hire whomever she wants as a paid gun thug.  She also has the resources and contacts to obtain advanced weapons and equipment that wouldn’t normally be available to a common thug.  She has also been know to make pacts with the Axis powers to help with her battle against the Human Torch and Toro so she can be accompanied by stateside Axis agents with all the advantages they would normally provide.
Firefly Mercenaries:  Murdock is the weapon and equipment designer of the mercenary gang called the Firefly Mercenaries who use flame-based weapons and have flame-retardant uniforms.  Because of their intimate connection to the Asbestos Lady, they are often accompanied with her when battling the Flaming Duo.
Wargaming Piece:  There isn't any dedicated mini for Asbestos Lady but she wouldn't be to hard to modify from various pre-existing minis in the market.  If you decide to make one up be sure to let us gave a look.
Posted by Weird WWII at 2:04 AM