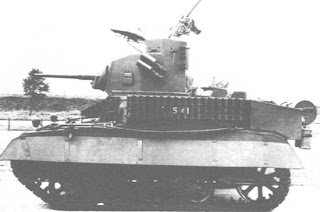 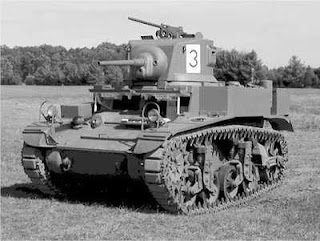 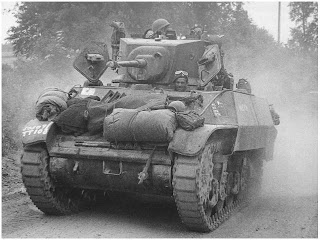 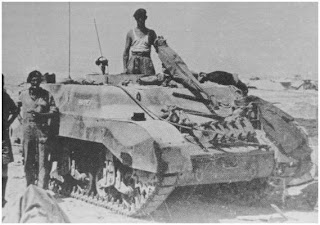 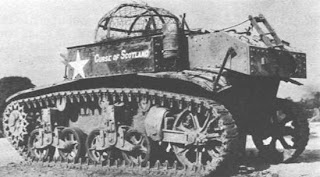 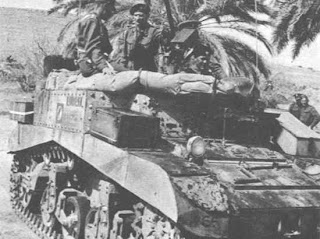 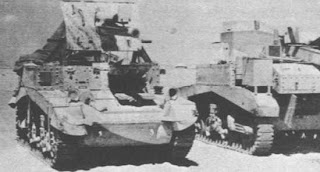 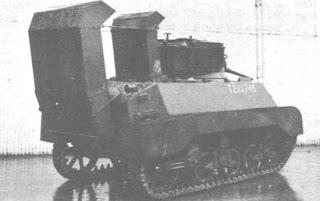 
Notes:  The Stuart/Honey would see itself on all the war fronts that the Commonwealth were fighting for the duration of the war.  Although officially called the Stuart, the vehicle was also often referred to as the Honey by its crew because of its great handling compared to British tanks of the day.
Date Introduced:  I & II (Early '41), III & IV (Mid '42), V (Late '42), Kangaroo (Late '43), Recce (Mid '43), Command (Mid '43) & 18pdr SP (Early '42).
Users:  These rules are meant to be for Commonwealth issued M3 Light Tank variants.
Vehicle Chart:  There is a Honey vehicle chart found in the Crusade for Empire supplement.  You can easily modify this chart for the various other versions that don't have a dedicated chart of its own.
Crew:  All variants have a crew of 4 (commander/radio op., gunner, driver, loader) with the exception of the Kangaroo, Recce and Command versions which have a crew of 2 (driver & commander) and can carry an additional 3 passengers where the Kangaroo can hold an additional 5 passengers.
Riveted Construction:  Many models of the Start/Honey have or had riveted construction of some sort over its production and will suffer as such if struck at the appropriate locations by enemy fire.  Any non-penetrating hits to a location with rivets will force any crew that might be at that location to take an immediate D column hit.  Apply any effects as normal with the exception of any MC or Suppression results will be considered -1 action for the effected crewman for the remainder of the battle.  Apply what locations are covered by this rule via the WYSIWYG rules.
High Ground Pressure:  All tank models suffer from high ground pressure and will suffer a +1 to all Bog Checks as such.
Unarmored Ammo Storage:  Because of the vehicle's poor ammo storage, it was prone to catch fire if penetrated.  Penetration Effects are at a -1 for all models that carry ammunition for a cannon it is mounted with.

4" Smoke Dischargers:  All turreted Stuart/Honey models have two sets of dual 4" smoke launchers fixed to either side of the turret loaded with smoke rounds.  The commander uses an action to fire the launchers in which both will fire a single smoke round that will then smoke the front 180-degrees of the turret's front.  The launchers can only be reloaded externally and it will take a crewman one action to load a single launcher.  If only one set is loaded and then fired, it will only produce a 90-degree smoke cloud to the front side of whatever launcher was fired.  Availability is 12.

AAMG:  The mount for the AAMG is mounted on the right side of the turret next to the hatch making it only usable to target on the right side of the vehicle.  This rule is only for models with fully enclosed turrets.
Pistol Ports:  Stuart/Honey models had various turrets over its production and some were fitted with pistol ports.  These ports allowed for the crew to fire their side arms from within the vehicle usually at assaulting enemy infantry.  The commander and loader may fire their pistol or sub machine guns out of a pistol port by using an action in doing so.  All pistol ports have a 90-degree fire arc and will always suffer a 1/2 To Hit penalty.  Note that prone infantry 1" away from the vehicle cannot be hit by fire from these ports and infantry within 2" will receive partial tank cover from fire from the pistol port.  As for what model is fitted with pistol ports, just use the WYSIWYG rules to determine which.

Diesel Engine:  The II and IV models have a diesel engine that benefits the vehicle with a +1 to any effects on the Penetration Effects chart.
Open-Topped:  The Command, Recce, Kangaroo and SP models are all Open-Topped vehicles and will be bound by those rules as such.
Grenade Screen:  It was common for Recce and Command models of the Stuart/Honey to be fitted with large metal screens that prevented enemy troops from throwing explosives or grenades into vehicle's open hull.  Any grenades or other explosives thrown into a vehicle with these additions will bounce off the screen and fall to a random side of the vehicle on a 19.  On a 20, the explosive explodes just as it hits the screen and will be treated as a normal explosive to any crew or passengers covered by the HE template.  Note that crew under the screen can still be exposed and still benefit from the screen's special rules as normal.
Tarpaulin Cover:  All Open-Topped models are equipped with tarps as basic kit.
M2 Canister Shell:  The M2 shell was in essence a large shotgun that fired 122 steel balls in a devastating short ranged pattern.  To fire the M2 just use the normal rules to fire the main gun and then place the 37mm Canister template 6" directly forward of the barrel and roll as normal for anything under the template.  Anything within the path of the 6" before the template is placed is considered to be hit with an A column hit.  Note that because the shell is in essence a shotgun shell, it can be used whilst on the move without the normal To Hit modifiers for moving whilst firing.  The Availability is 10 in the PTO and a 5 for all other theaters with D8 shells available.
18pdr SP:  This model has a 18pdr. fitted on top of a turret-less vehicle minus its wheels used as a make shift self-propelled gun.   The gun crew operate the gun on top of the tank's deck and receive no cover from flank or rear shots but will benefit from the weapon's gun shield from enemy fire from their front.  This open crew compartment also allows a fully halted vehicle and full crew to reduce their Load time 1/2 which means they can fire and load in the same action.  Treat the gun and crew as if an artillery crew as normal.  The 18pdr is capable of firing a HE, AP, Smoke and WP shell.  The WP Availability is 14 with D10 rounds.
Indirect Fire:  The 18pdr SP may use indirect fire with its weapon.  The weapon has a minimum range of 45" and an unlimited maximum range when using indirect fire.
Exposed Gunner's Position:  Any crew member manning machines gun on the Kangaroo, Command or Recce models will only receive +2 cover where as all other crew will gain the +5 Partial Tank Cover modifier.

Gyro-Stabilizer:  III, IV and V models are fitted with a gun stabilizer that increases accuracy when firing on the move.  The stabilizers are not very popular with the crews because it takes extensive training and maintenance to benefit from its use and many crews would rather stop and fire instead.  The crew must pass a 1/2 Skill Check at the beginning of the battle to use this piece of equipment.  Any tank with a working stabilizer has a reduced To Hit penalty noted below.

Moved in previous action    +3 To Hit
Fire on the move                 +6 To Hit
Deep Wading Stuart/Honey V:  Deep wading Stuart/Honeys were fitted with tall ducts to the engine that allowed the air-tight tank to move partially submerged under water.  These were designed in response to the horrendous actions of the Duplex Drive "Sherman"s during D-Day.  Deep wading tanks can transverse water by moving at 1/4 its normal speed while in the water.  If the vehicle or ducts are penetrated while in the water, the tank will be lost and the crew will be KIA unless they pass a 1/4 Skill Check to escape the drowning tank.  All To Hit rolls to a swimming vehicle will be at a +2 due to its small size when in the water.  The tank can only fire its machine guns when partially submerged.  Availability is 5.
Wargaming Piece:  You can pick up various models of the Stuart/Honey in 1/48 or 1/50 scale from several different plastic, resin and die-cast toy companies so use some Google-Fu and see what you find.  Anything you can't find you can see what kind of conversion skills ya got.  If you do do some conversions, be sure to let us see what you came up with.