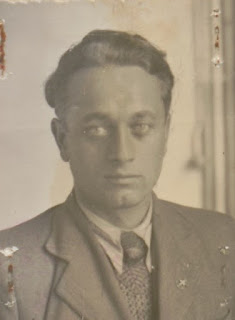 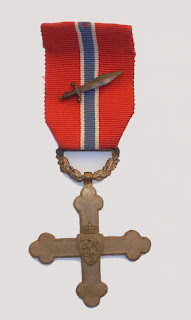 Piotr Szewczyk
"Mobilized on September 1, 1939, he fought in the defense of Warsaw and then he managed to get through Hungary to Yugoslavia and then to France where he joined the Independent Podhale Rifle Brigade.  He fought in the Battle of Narvik as the commander of the 4th platoon of the 1st company of the 4th battalion.  After the defeat of Norway, he returned to France, where his unit fought in Brittany.  After the fall of France, he escaped to Great Britain, where he joined the 1st Independent Parachute Brigade under General Stanisław Sosabowski.  On January 16, 1942, he volunteered to serve in occupied Poland as undercover agent. After training and taking the oath to the rite of the ZWZ-AK, he assumed the pseudonym "Czer" and was promoted to the rank of lieutenant.  He found himself in a team of four jumpers, which on the evening of February 17, 1943 took off from the secret RAF Tempsford airfield near London.  Drop at the "Puchacz" collection point, near the towns of Stare Łepki, Mordy, 17 km from Siedlce.  In the spring of 1943 he was sent to Lviv, where, as an officer of the Home Army, he took command of the subversive region of Lviv-City.  He used the pseudonyms "Piter" and "Siwy" there.  He initiated and organized many combat actions. On November 11, 1943, he was promoted to the rank of captain. During the liberation of Lviv and during the fights for this city, which lasted from 23 to 27 July 1944, he commanded a company of soldiers of the Home Army, which liberated the city center. building of the Lviv Polytechnic. Avoiding arrest by the NKVD, in July 1945, he reached London via Warsaw, where he reported on the events to date to General Stanisław Tatar and held talks with other Polish officers. He also received the rank of major."  He would receive the War Cross for his actions during the Battle of Narvik.
A truly honored ally,
Brian
Posted by Weird WWII at 12:00 PM