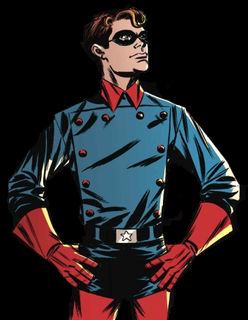 Origin: James Buchanan Barnes lost his mother at an early age and traveled the country with his unemployed father looking for work during the Great Depression. The Barnes then came to Camp Lehigh when Bucky's father joined the U.S. Army. Not soon after his enlistment, Bucky's father died in a training accident, and he became a ward of the state. The camp commandant felt sorry for the young teen and was able to make Bucky a mascot for the base. Bucky was given numerous jobs around the camp that allowed him to watch and learn how to soldier by imitating what he saw. Several recruits and instructors taught him what they knew out of pity for the boy. Bucky became a close friend to a new, third-rate private know as Rogers. One night while entering Rogers’ tent, Bucky witnessed Rogers changing into the costume of none other then Captain America. Dumbfounded, Bucky pleaded to his best friend to let him help with spy smashing and under much protest Cap relented and took in the young teen as his partner. The two trained together extensively and stopped numerous Axis spy rings and saboteurs. It was during these adventures that Cap realized that the teenager was one of the greatest natural athletes and combatants he had ever seen. Under Cap’s instruction, Bucky became a top rate soldier besting most of the older GIs on the base. Several months later, Bucky became Cap's official partner and the two joined the Allied super-hero team, the All-Winners Squad. Bucky has become an important part of the Allied cause and a positive propaganda tool for the U.S. to recruit young men into the armed services.

Name: James Buchanan Barnes
Rank: Special Field Operative
Nationality: United States of America
Affiliation: U.S. Army, All-Winners Squad, Liberty Legion & Kid Commandos
Base of Operations: Worldwide
Height: 5' 7"
Weight: 150 lbs
Eyes: Brown
Hair: Brown
Actions: Bucky has two actions per turn as per the normal rules.
Senses: Bucky acts like anyone else when making any sensory-based tests.
Strength and Toughness: Bucky possesses the normal strength and toughness of a teenage boy of his age that is engaged in intensive physical activity and training.
Movement: Bucky can move 7", run 10", crawl 3" and leap up to 3" per action. He can swim at the normal rate +2" and can hold his breath up to D10+4 actions.
Training: Bucky is a remarkable natural athlete and has received intensive training from his partner Captain America along with numerous others in the art of warfare. Bucky is proficient in all known weapons and explosives within the combined Allied arsenal and will never suffer from the Unqualified or Captured Use rules for any weapons or explosives found on the battlefield unless it is more advanced for the time or is alien or supernatural in nature in which he will have to perform the appropriate tests to use such equipment with all the normal penalties included. Bucky is an expert motorcyclist and will receive an additional -1 to any tests when riding one. Bucky is also proficient in all motor vehicles of the time and has elementary training in piloting aircraft and watercraft.
Morale: Bucky is considered a 14-2 Elite Hero. He can never be affected by a Suppression result unless in a blast. If leading the Kid Commandos, he will have a Command Radius of 16".
Weapons & Equipment: Bucky is mostly armed with a Colt 1911 pistol and an M1A1Thompson SMG with several grenades and basic U.S. combat kit as normal. Idol Worship: Bucky thinks so highly of Cap that when they are in a fight together it drives Bucky to greater heights of bravery and achievement to make his idol proud. To represent this, Bucky may use Cap's Leadership Modifier if he is within 5" of Cap with a direct LOS. If Cap were to fall during a battle, Bucky would then fight under the Fanatic rules with No Quarter for the remainder of the battle as his rage takes over and wreaks revenge for his fallen friend.
Posted by Weird WWII at 3:12 PM