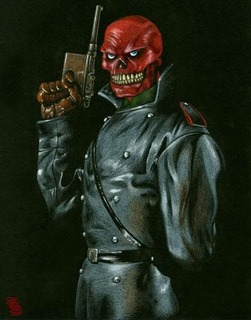 Origin:  After being abandoned by his family, Johann Schmidt lived in an orphanage his whole adolescent life.  He was tormented throughout his youth and later would live on the streets as a petty thief and vagrant.  Johann then found work with a local Jewish man and fell in love with his daughter.  Johann, for the first time in his life, felt love and joy and wanted to marry the girl.  He proposed to the girl and she politely rejected his offer.  In a fit of blind rage, he beat his love to death.  After the murder, Schmidt felt invigorated with a surge of power that sparked the evil that would become the Red Skull.  Johann then joined the SS in the early 30s and became muscle for the growing Nazi party.   His exploits would soon reach that of Hitler himself.  Shortly after the invasion of Poland in 1939, Schmidt was picked by Hitler to become a special agent whose mission was to attack the Allies via special commando raids that were often conducted on Allied nation's own soil.  He would also be responsible for numerous spy rings and 5th Columnist groups around the world.  Hitler soon gave the Red Skull a position of rank only second to himself so that he could even take on Hitler's hidden enemies at home without interference.  The Red Skull became legendary for his brutality and hatred for all enemies of the Fatherland and would soon become feared throughout the world.  However, the Red Skull eventually fell victim to failure by the actions of Captain America and the two would become bitter enemies.  The Red Skull's lust for power became so powerful that he even began to set the stage for world domination in case the Nazis were to lose the war with his secret army, HYDRA.  Schmidt would filter funds from Nazi projects and use war booty to create this new army all the while executing highly successful commando raids and assassinations abroad for the Nazis.  Johann's lust for power shows no limit and he holds himself above all other men, especially his arch-nemesis Captain America.  He will stop at nothing to assure his power. Nothing.
Name:  Johann Schmidt
Rank:  Special Field Operative (Germany) & Secret HYDRA Emperor (HYDRA)
Nationality:  Germany
Military Affiliation:  Special Government Agent, SS and HYDRA
Base of Operations:  Worldwide
Height:  6’ 1"
Weight:  189 lbs
Eyes:  Blue
Hair:  Blond
Actions:  The Red Skull has two actions per turn as per the normal rules.
Senses:  The Skull acts like anyone else when making sensory-based tests.
Strength and Toughness:  Schmidt has the normal characteristics of a man his age that engages in intermediate physical activity and training.

Movement:  The Skull moves as per the normal rules.
Training:  The Red Skull is a master political and military tactician who has been personally trained by Hitler and all the best political and military officials that Nazi German has available.  Schmidt is also a genius and is a master manipulator and orator.  The Skull can also speak every major language on the planet as well as a few dead ones.  The Skull is also proficient in all known Allied and Axis weapons and explosives as well as weapons and equipment of advanced design given to him by unknown sources.  Because of this, he will ignore all Unqualified, Captured Use and Crew Served rules unless the technology is more advanced for the time or is alien or supernatural in nature or it wasn't in his possession before the battle began.  The Skull is and expert pilot of all aircraft, boats and vehicles of the day.
Morale:  Schmidt is considered a 19-4 Legendary Leader and will ignore all Man Alone, Enemy Vehicle and Breaking Point rules and will never become a hero or coward.  The Red Skull has a Command Range of 20" to any German troops or civilians.  Because the Red Skull is more feared then respected, no one will be able to use his Leadership Modifier during a battle.  This fear will also allow friendly troops to ignore any Leader Loss rules or Gory Death results when it comes to the Red Skull.
Weapons & Equipment:  The Red Skull has access to anything within the combined arsenals of all Axis nations' inventories as well as some weapons and equipment of advanced design from an unknown source.  The only regular weapon he carries is a C96 pistol that he was awarded by Hitler for his service and a poison gas of his own creation called the "Dust of Death".
Evil Incarnate:  Schmidt is evil incarnate and will reinforce this with his actions.  Schmidt doesn't have to make any tests to perform any evil act against anyone so he can do just about anything he wishes on the battlefield without any penalty.  This includes the individuals under his command too as they know what will happen if they do not follow his orders to the letter.  Any failure to follow his order will meet with immediate execution.
Quick Escape:  The Red Skull only cares about one person and that is himself, which makes him a master of self-preservation.  He will have secret passages in his hideouts and vehicles and also equip himself with equipment and gadgets that allow for his swift escape in most situations.  In game terms, if the Red Skull is in fear of being harmed or captured and has an action left, he can attempt a quick escape.  On a successful ½ Skill Check, the Red Skull may be moved immediately D20+6" to the nearest table edge from his current location.  This movement will negate all terrain and scenery.  If this movement could cause him harm then he will just be moved in a manner to get him furthest away from all enemy units as possible.  If the roll fails, then he cannot use it again for the remainder of the battle as his trick to make his escape has malfunctioned or just failed.  This manner of escape can be due to just about anything but the Commander playing the Red Skull has to inform the opposing Commander how he did it no matter how fantastic.  If this rule is used, he will use all remaining actions to exit the board in the quickest manner possible.
The "Dust of Death":  The Dust of Death is a special lethal gas that Schmidt created himself that he deploys from various means like a glass vile, pistol or cigarette.  The gas kills its victims instantly by being inhaled or even by touch and causes the victim's heads to transform into a grotesque red skull at death.  The Red Skull is immune to the gas and will never be susceptible to it.  Anytime the Red Skull in within 2" of an individual he may make an immediate Skill Check to use his gas, even if he doesn't have an action left.  If successful, the target will die immediately unless they make a ¼ Skill Check in attempting to dodge the attack.  If the target is wearing a gas mask or other anti-gas equipment, they will only die if they fail a basic Skill Check as per normal rules.
Access to Advanced Tech:  It is not known exactly how or where the Red Skull acquires these items but he is often in possession of weapons and equipment that are far advanced for the time.  The Red Skull may have a single special piece of kit that the commanding player may make up for the battle.  The rules must be given to the BM or opposing Commander for approval.  If a BM rejects it then the item is discarded but if the opposing Commander disagrees then a score of a 5 or less is needed on a D20 for it to be used.
Valkyrie Bodyguard:  The Red Skull has access to the elite Valkyrie Corps if he so wishes and may be accompanied by no more then two during a battle.
Zola's Bio-Constructs:  The Red Skull is often accompanied by bio-constructs created by the mad geneticist, Arnim Zola.  The Skull may have up to D6 bio-constructs present on the battlefield that follow all the normal rules with the exception that they will be bound by his will and not that of Zola's.
HYDRA:  Due to his position within the HYDRA organization, the Red Skull may have access to any HYDRA resources or forces if he so wishes without limits.
Wargaming Piece:  I use the excellent herr Totenkopf from What The?! Miniatures.  Alternatively, Heroclix makes some Red Skull minis and you can easily make a conversion with just adding a skull head to just about any mini.
Posted by Weird WWII at 3:53 PM