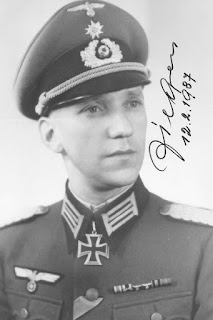 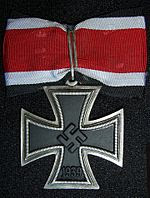 Karl Ziegler
"Ziegler’s battalion was deployed along the defensive front of the division on both sides of Abinskaja in a crucial position.  Holding this area was of massive importance for not just the division but also the other units in the vicinity.  On the night of the 22./23.02.1943 the Russians attacked along a very narrow strip of front-line with their 1135th Rifle Regiment, specifically a weak company from Ziegler’s battalion located in the center of its front.  Utilizing the nighttime conditions as well as the limited visibility of the terrain, the enemy was able to approach very close to the front unnoticed before storming the friendly positions in a massive assault.  Major Ziegler, who had no reserves available aside from a squad from the Infanterie-Pionierzug, immediately sealed off this penetration with a zug taken out of the line from a neighboring company.  He then commenced a counter-thrust along the front-line from south to north at the head of the pioneer squad.  With hand grenades and a machine pistol he stormed forward with his handful of men.  Inspiring them through his boldness and aggressiveness, the unit plunged itself into the enemy that outnumbered them 10-1 and was able to overpower them in bitter close combat.  By the end of this short yet extremely intense night-time action, 100 dead Russians lay on the battlefield. 9 prisoners were captured, as well as 2 heavy mgs, 4 light mgs, 2 mortars and numerous other infantry weapons.  Through this determined and bold act, conducted with heroism as well as exemplary bravery, Major Ziegler succeeded in eliminating a great danger for the whole defensive front that was in the process of developing. In doing so he secured a victory of great importance far beyond just the division itself.  The friendly losses taken during this battle were insignificantly small thanks to the skillful leadership of the battalion commander.  Major Ziegler is fully worthy of being awarded the Knight’s Cross to the Iron Cross.”  from his Knight's Cross to the Iron Cross citation, awarded on April 8th, 1943 as Major of the Kommandeur III./Jäger-Regiment 20.
Another capable enemy elite,
Brian
Posted by Weird WWII at 10:15 PM