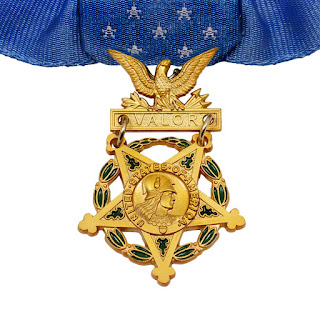 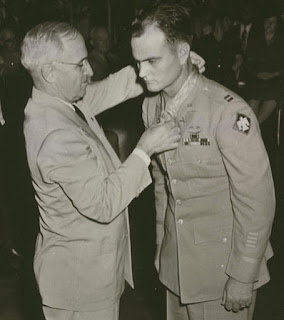 Jack LeMaster Treadwell with Trueman
"Capt. Treadwell (then 1st Lt.), commanding officer of Company F, near Nieder-Wurzbach, Germany, in the Siegfried line, single-handedly captured 6 pillboxes and 18 prisoners.  Murderous enemy automatic and rifle fire with intermittent artillery bombardments had pinned down his company for hours at the base of a hill defended by concrete fortifications and interlocking trenches.  Eight men sent to attack a single point had all become casualties on the bare slope when Capt. Treadwell, armed with a submachinegun and handgrenades, went forward alone to clear the way for his stalled company.  Over the terrain devoid of cover and swept by bullets, he fearlessly advanced, firing at the aperture of the nearest pillbox and, when within range, hurling grenades at it.  He reached the pillbox, thrust the muzzle of his gun through the port, and drove 4 Germans out with their hands in the air.  A fifth was found dead inside.  Waving these prisoners back to the American line, he continued under terrible, concentrated fire to the next pillbox and took it in the same manner.  In this fort he captured the commander of the hill defenses, whom he sent to the rear with the other prisoners.  Never slackening his attack, he then ran across the crest of the hill to a third pillbox, traversing this distance in full view of hostile machine gunners and snipers.  He was again successful in taking the enemy position.  The Germans quickly fell prey to his further rushes on 3 more pillboxes in the confusion and havoc caused by his whirlwind assaults and capture of their commander.  Inspired by the electrifying performance of their leader, the men of Company F stormed after him and overwhelmed resistance on the entire hill, driving a wedge into the Siegfried line and making it possible for their battalion to take its objective.  By his courageous willingness to face nearly impossible odds and by his overwhelming one-man offensive, Capt. Treadwell reduced a heavily fortified, seemingly impregnable enemy sector."
From 1Lt Treadwell's Medal of Honor citation, awarded on August 23 1945.
May you be at peace,
Brian & Mel 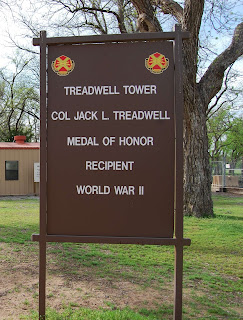 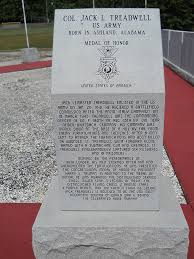 Memorial in Lineville, AL
Posted by Weird WWII at 5:58 PM