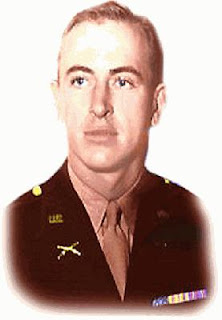 "For distinguishing himself conspicuously by gallantry and intrepidity at the risk of his life above and beyond the call of duty in action with the enemy on Guadalcanal Island.  On January 12, 1943, Maj. Davis (then Capt.), executive officer of an infantry battalion, volunteered to carry instructions to the leading companies of his battalion which had been caught in crossfire from Japanese machine guns.  With complete disregard for his own safety, he made his way to the trapped units, delivered the instructions, supervised their execution, and remained overnight in this exposed position.  On the following day, Maj. Davis again volunteered to lead an assault on the Japanese position which was holding up the advance.  When his rifle jammed at its first shot, he drew his pistol and, waving his men on, led the assault over the top of the hill.  Electrified by this action, another body of soldiers followed and seized the hill.  The capture of this position broke Japanese resistance and the battalion was then able to proceed and secure the corps objective.  The courage and leadership displayed by Maj. Davis inspired the entire battalion and unquestionably led to the success of its attack."