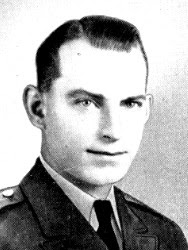 "For conspicuous gallantry and intrepidity at risk of life above and beyond the call of duty.  On 2–3 June 1944, at 1 a.m., Pvt. Christian elected to sacrifice his life in order that his comrades might extricate themselves from an ambush.  Braving massed fire of about 60 riflemen, 3 machine guns, and 3 tanks from positions only 30 yards distant, he stood erect and signaled to the patrol to withdraw.  The whole area was brightly illuminated by enemy flares.  Although his right leg was severed above the knee by cannon fire, Pvt. Christian advanced on his left knee and the bloody stump of his right thigh, firing his sub machine gun.  Despite excruciating pain, Pvt. Christian continued on his self-assigned mission.  He succeeded in distracting the enemy and enabled his 12 comrades to escape.  He killed 3 enemy soldiers almost at once.   Leaving a trail of blood behind him, he made his way forward 20 yards, halted at a point within 10 yards of the enemy, and despite intense fire killed a machine-pistol man.  Reloading his weapon, he fired directly into the enemy position.  The enemy appeared enraged at the success of his ruse, concentrated 20-mm machine gun, machine-pistol and rifle fire on him, yet he refused to seek cover.  Maintaining his erect position, Pvt. Christian fired his weapon to the very last.  Just as he emptied his sub machine gun, the enemy bullets found their mark and Pvt. Christian slumped forward dead.  The courage and spirit of self-sacrifice displayed by this soldier were an inspiration to his comrades and are in keeping with the highest traditions of the armed forces."

A true ass kicker in every way and a man who put his comrades above all else,
Brian
Posted by Weird WWII at 6:43 AM