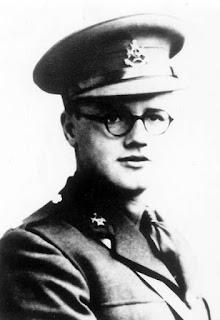 John Henry Cound Brunt
"In Italy, on the 9th December, 1944, the Platoon commanded by Captain Brunt was holding a vital sector of the line.  At dawn the German 90 Panzer Grenadier Division counter-attacked the Battalion's forward positions in great strength with three Mark IV tanks and infantry.  The house, around which the Platoon was dug in, was destroyed and the whole area was subjected to intense mortar fire.  The situation then became critical, as the anti-tank defences had been destroyed and two Sherman tanks knocked out.  Captain Brunt, however, rallied his remaining men, and, moving to an alternative position, continued to hold the enemy infantry, although outnumbered by at least three to one.  Personally firing a Bren gun, Captain Brunt killed about fourteen of the enemy.  His wireless set was destroyed by shell-fire, but on receiving a message by runner to withdraw to a Company locality some 200 yards to his left and rear, he remained behind to give covering fire.  When his Bren ammunition was exhausted, he fired a PIAT and 2 in. Mortar, left by casualties, before he himself dashed over the open ground to the new position.  This aggressive defense caused the enemy to pause, so Captain Brunt took a party back to his previous position, and although fiercely engaged by small arms fire, carried away the wounded who had been left there.  Later in the day, a further counter-attack was put in by the enemy on two axes.  Captain Brunt immediately seized a spare Bren gun and, going round his forward positions, rallied his men.  Then, leaping on a Sherman tank supporting the Company, he ordered the tank commander to drive from one fire position to another, whilst he sat, or stood, on the turret, directing Besa fire at the advancing enemy, regardless of the hail of small arms fire.  Then, seeing small parties of the enemy, armed with bazookas, trying to approach round the left flank, he jumped off the tank and, taking a Bren gun, stalked these parties well in front of the Company positions, killing more and causing the enemy finally to withdraw in great haste leaving their dead behind them.  Wherever the fighting was heaviest, Captain Brunt was always to be found, moving from one post to another, encouraging the men and firing any weapon he found at any target he could see.  The magnificent action fought by this Officer, his coolness, bravery, devotion to duty and complete disregard of his own personal safety under the most intense and concentrated fire was beyond praise.  His personal example and individual action were responsible to a very great extent for the successful repulse of these fierce enemy counter-attacks.  The next day Captain Brunt was killed by mortar fire."

Thank you for your service and may you find peace,
Brian
Posted by Weird WWII at 8:13 AM