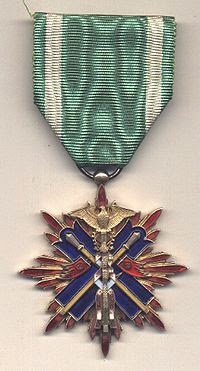 Tsuji was responsible for the successful Malayan Invasion and for the defensive actions at Guadalcanal where he won the favor of the Emperor.  While he was never indicted for war crimes, subsequent investigations have revealed that he was involved in or contributed to the execution of various war crimes throughout the war including the massacre of Chinese civilians in Singapore, the mistreatment and executions of prisoners of war during the Bataan Death March, the executions of captured government officials of the Philippines, and other war crimes in China.  Masanobu Tsuji was regarded as the most notorious Japanese war criminal to escape trial after the war.  After Japan's surrender in September 1945, Tsuji went into hiding in Thailand for fear of being tried on war crimes charges.  When it was clear he would not be, he returned to Japan and wrote of his years in hiding in what became a best seller.  His memoirs made him famous and he later became a member of the Diet.  In April 1961, he traveled to Laos and was never heard from again.  Presumably a casualty of the Laotian Civil War, he was declared dead on July 20, 1968.  Another example of a Japanese war criminal that dodged justice for their crimes against humanityin the Pacific Theature.

A truly evil man who escaped justice,
Brian
Posted by Weird WWII at 9:41 AM