"Battle of the Bulge" 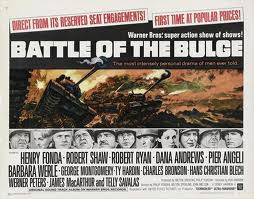 This is a classic example of how most Hollywood-made historical pieces back in the day just suck!  The movie gets the general facts of the battle but that's about it.  It's a shame, because the flick has some great actors in it too but that can't save this turkey.  With the Spanish army lending its tank corps to the film makers, you get a Ardennes that looks more like North Africa circa 1965 then the cold forests of Belgium.  However, the riffs you can do to it is worth a view so check out the trailer and see what lies in store for ya.


Wonder if the Spanish army will do my son's birthday party?
Brian
Posted by Weird WWII at 12:26 PM