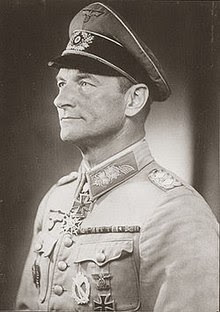 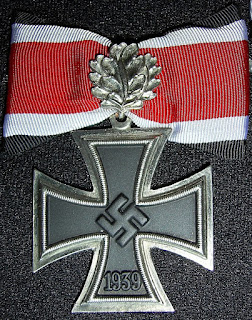 Erich Abraham
"Oberst Abraham and his Infantrymen Regiment 230 were involved in heavy defensive combat at the blocking position north of Stalingrad ever since our own forces broke through to the Volga on 24.08.1942.  They served in this capacity up until the division was pulled out of the line on the 01.10.1942, in accordance with orders from the Army.  Throughout the course of this extremely trying combat the Bolsheviks tried to relieve Stalingrad with a seemingly endless supply of both fresh reserves and tanks.  However Oberst Abraham and his brave men fought with equal determination throughout this period, holding their positions to the last man during the weeks of defensive fighting.  Oberst Abraham particularly distinguished himself during the major Russian attacks on the 18. and 23.09.1942.  Our defending forces had been severely weakened by the previous combat, and so on both of these two days the Russians were able to completely wipe out the garrison in two locations after heroic combat by our forces.  The enemy poured in strong infantry and tank forces through these narrow gaps, and they advanced all the way to Oberst Abraham’s command post.  Here Oberst Abraham fought with the same spirit of bravery and self-sacrifice exhibited by the soldiers that fought in the foremost line.  He personally gathered up the men of his staff, and with them he held off the attacks of the far numerically superior enemy with a weapon in his own hands.  Ultimately he managed to hold out on both occasions until reserves were brought up.  Although his own weak forces stood little chance of success against the much larger force, Oberst Abraham then decided on both occasions to launch an immediate counter-thrust without waiting for orders from the division.  Oberst Abraham’s personal devotion to duty here was enough to inspire his men to risk going onto the offensive.  In the resultant combat the enemy was torn apart, the hostile tanks destroyed and the front-line totally restored by the evening. Oberst Abraham was clearly able to demonstrate his steadfastness, energy and personal bravery on both of these days.  By doing so he managed to prevent the impending enemy breakthroughs and thereby achieve defensive successes that were of significance for the entire overall situation. It is likewise to Oberst Abraham’s primary credit that his regiment was able to hold its front-line on all other combat days.  Throughout this time he understood the necessity of inspiring his regiment with the appropriate fighting spirit, and this enabled it to withstand the enemy’s great superiority in spite of its own heavy losses.  By successfully holding his sector of the front-line he contributed to the ability of our forces in Stalingrad to carry out their operations without interference.  Oberst Abraham has already been recommended for the Knight’s Cross to the Iron Cross on account of his brave and successful conduct during the encirclement battle at Kalatsch."  from his Knight's Cross to the Iron Cross citation, awarded on November 13th, 1942 as Oberst of the Infantrymen Regiment 230 of the 76th Infantry Division.
"Generalleutnant Abraham and his reinforced division succeeded in establishing a bridgehead over the eastern bank of the Latka river (northwest of Odessa) at the beginning of April 1944.  The division subsequently succeeded in holding this bridgehead open for those German forces that were fighting their way through Soviet formations as they retreated westwards.  Abraham would be awarded the Oakleaves for his role in this decisive feat."  from his Knight's Cross to the Iron Cross with Oak Leaves citation, awarded on June 26th, 1944 as Generalleutnant of the 76th Infantry Division.
Another capable enemy elite,
Brian
Posted by Weird WWII at 5:10 AM