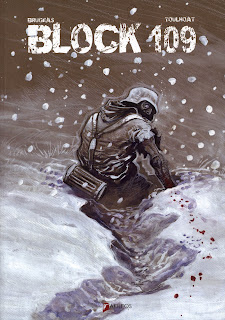 This Akileos series of graphic novels by Brugeas and Toulhoat tells the tale of a "What If" world where Hitler was assassinated in '41 and that the American and Brits are blown to shit by a nuclear attack.  Germany has pretty much conquered Europe but is still fighting Russia in the East as well as for dominance of the rest of the planet.  To be honest with ya, it's in French and I don't read French other then what Globefish can translate for me so its a bit messy script-wise on my end.  Story seems really weird war on the side of total fantasy but still might be interesting to check out if you can read the ol' French.  Swing by their blog to get a review of their works and see if its your cup of wine.

I love how they just off the Brits and Americans to further the story,
Brian
Posted by Weird WWII at 2:19 PM 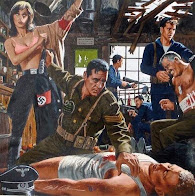 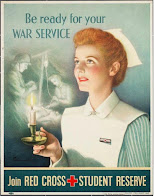 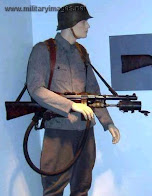