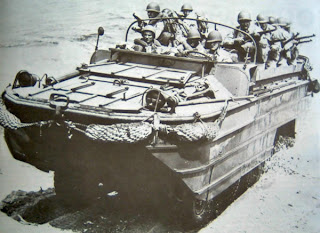 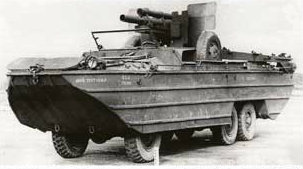 Notes:  These rules are for the DUKW 2-ton amphibious truck.  These things make great general transports and has the added bonus of being amphibious when needed.  Be sure to pick up the core Battleground WWII rules to benefit from these rules.
Date Introduced:  Late '42
Users:  U.S., Commonwealth Nations & Russia
Vehicle Chart:  There is a DUKW chart in the Islands of Glory supplement.
Crew: The DUKW has a crew of 1 (driver) and can carry up to 20 passengers.
Cargo:  The DUKW is capable of hauling several tons of cargo if not carrying any troops.  The truck is also able to tow trailers or weapons if not being used in amphibious operations at the time.

Truck:  The DUKW is considered a truck and will use the rules as such.
Amphibious:  The DUKW is fully amphibious without any prep needed and can move 4" per action in water with all normal modifiers as applicable.  The vehicle will be bound by all the rules for amphibious vehicles as normal.
Sand Tires:  In North Africa, many lite vehicles were fitted with large balloon-like tires that helped the vehicle move better in the desert sands.  If any vehicle is fitted with these tires, they will be able to move at 3/4 their normal movement instead of 1/4 and  receive a -1 bonus when making Bog Checks when moving through sand.  Availability is 10 for units in Africa and a 5 for any other theater.
Snow Chains:  Snow chains were fitted to the tires of vehicles to help them better grip onto icy surfaces.  If a vehicle has snow chains then it will receive a -1 bonus to any Bog Checks made on icy or snowy roads.  Availability is a 10 or less on any front.
MG Ring:  The DUKW can be fitted with a gun ring armed with either a .30cal machine gun with an Availability of 8 or .50 cal machine gun with an Availability of 5.  Due to the high position of the gun ring, the gunner is able to engage any targets 2" from the vehicle.
Mobile Artillery:  In the PTO, several howitzers and guns of varying size were fitted onto the DUKW so that they could be fired from the vehicle.  These vehicles were used as ad hoc mobile artillery for the first waves of the invasion force until more static artillery could be brought inland and set up for supporting fire.  Treat any DUKW converted in such a way as a SPG with an open-top and with a 45-degree field of fire to the vehicle's front.  Use the normal rules for whatever weapon is mounted in the DUKW as normal.
Wargaming Piece:  Solido makes a 1/50 die-cast toy and Quarter Kit also has a 1/48 resin kit of the DUKW.