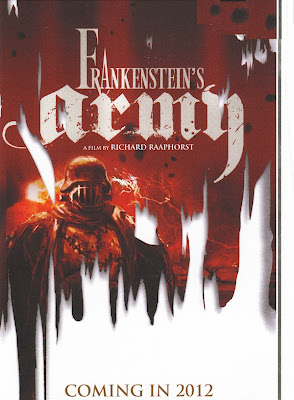 In a last ditch effort to turn the tide of war, the Germans use the twisted secrets discovered by Dr. Frankenstein to create an unstoppable army from the dead and unleash it against the Russian juggernaut that threatens the very borders of the Fatherland.  Can the Reds overcome this horror or will this reanimated army of the crooked cross add them to their ranks?!  The same guy who almost brought us the cool looking WWWII dark comedy Worst Case Scenario, finally got some cash in his pocket to make what looks like a cool take on the classic Frankenstein flick.  I'm looking forward to finally seeing Richard Raaphorst WWWII vision on the big screen and hope it brings the genera to the mainstream. Check out the trailer and see what you think.


I hope it is as good as it looks,
Brian

UPDATE
Well I finally watched it and it sadly sucked.  Cool looking monsters and that was about it.  Give it a once over if you can do so for free but otherwise it isn't much to see or remember.