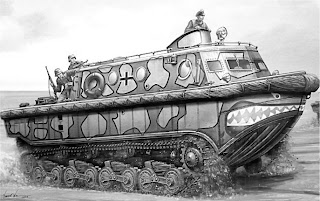 Notes:  Originally designed for the invasion of England, the LWS saw troubles with production and because of this and other issues it was never produced in large numbers. However, the LWS would find itself used on all fronts that German forces where fighting on throughout the war.  These rules are so you can go ahead and mount those German amphibious operations that never happened and even cross the Channel and take on the Limeys on their own turf.  Be sure to pick up the Battleground WWII core rules so you can get the most out of these incredible rules!
Date Introduced:  Early '40
Users:  Germany
Vehicle Chart:  I have a homemade vehicle chart I did off a 4-way pic from Blueprints so until I get it all spiffed up and looking nice, your on your own.
Crew:  The LWS has a crew of 2 (commander & driver) and can carry up to 20 fully combat loaded infantry.
Amphibious:  The LWS is fully amphibious without any prep needed and can move 4" per action in water with all normal modifiers as applicable.  Follow the amphibious rules as normal.
Winterketten or Ostketten Tracks:  The vehicle from mid '42 on may be fitted with the Winterketten track grousers for use in ice and snowy fronts or from early '44 on with the Ostketten track for muddy battlefields.  The Winterketten will provide a -1 to all Bog Checks made in snow or icy terrain and the Ostketten will provide a -1 to all Bog Checks in muddy terrain.  Both tracks types will also negate any High Ground Pressure penalties.  Availability for each is a 8 or less for any front.
Cargo and Towing:  The LWS is capable of carrying cargo instead of troops and is also able to tow the Kässbohrer amphibious trailer which is capable of transporting 10-20 tons of additional cargo.  It takes the crew two actions to limber or unlimber the Kässbohrer amphibious trailer from the LWS.  If the trailer is in place then the LWS will lose 1" of movement per action on land or in the water until the trailer is unlimbered or unloaded.
AAMG:  The LWS can be fitted with a AAMG fitted to the commander's hatch and one at the rear of the troop compartment.  All rules for AAMGs are as normal.  Availability for both AAMGs is 15.
LWS Effects Chart:  Treat the LWS as if a normal truck.  Note that any "Immobilized" results whilst moving in water will cause the vehicle to sink on a D20 roll of 11+.  The LWS will sink in D6 actions.  Any crew or passengers not passing a 1/2 Skill Check, before the vehicle sinks, will be KIA.  Survivors will have to use the normal rules for swimming to get to the shore from the location of the sinking LWS.
Rear-Mounted Wench:  The LWS is fitted with a powerful 13ton winch to its rear hull that can be used for multiple duties.
Searchlight:  The LWS is fitted with a movable searchlight to the front right of the commander's hatch.  The spotlight has a 20-degree cone and illuminate out to 35" anywhere within the vehicle's front 180-degrees.

Nahverteidigungswaffe:  The LWS is fitted with a launcher in its roof that is capable of firing small shells from within the safety of the vehicle.  The launcher has a 360-degree field of fire and is capable of firing  smoke or flare shells.  It will cost a passenger or one of the crew an action to load and another to fire the Nahverteidigungswaffe.  The launcher may be rotated 180-degrees and be fired in the same action it moved.  The smoke shells produce a Medium-sized template when fired.  The shell's template can be placed anywhere along a 360-degree arc, 2" away from the center of the vehicle's troop compartment.  Note that although this launcher is capable of firing a fragmentation shell, none are supplied to LWS crews because the fragmentation could easily damage the vehicle it is being fired from.
Amphibious Trailer: The trailer is targeted like any other vehicle and will be treated as a truck when taking fire.  If the trailer is in water and takes any result other then "No Effect" on the Truck vehicle chart, it will cause the trailer to sink in D4 actions.  The "Gas Tank/Explosion" result will cause the trailer to detach from the LWS and float away in direction and speed of the current of the water it is floating in.  The LWS has a quick detach hitch that allowed the trailer to be detached if it was in danger of swamping the LWS or vise verse so any sinking trailer will automatically be detached from the vehicle before it or the LWS sinks.  Availability for an amphibious trailer is 15 and can carry several tons of supplies.  The trailer is also capable of carrying up to 20 troops instead of cargo if need be.  Treat all passengers as if in a truck when taking fire.  If the trailer begins to sink the passenger must pass a Skill Check to escape where they leap out of the trailer into the water.  Once in the water, follow the normal rules for troops swimming.
Wargaming Piece:  I am not aware of a LWS in a 1/48 or 1/50 kit or die-cast toy so it you do let us know about it.