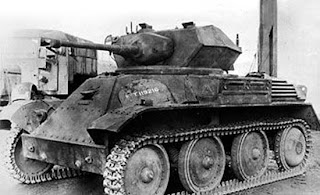 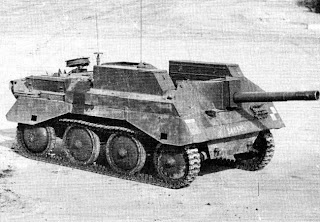 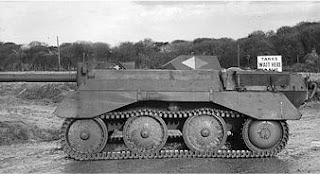 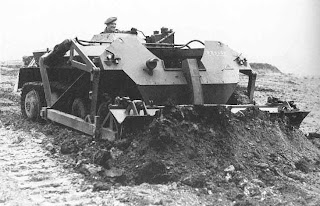 Notes:  The Mk. VIII was originally going to replace the Mk. VII but by the time it was deployed, the "powers that be" decided that light tanks were no longer needed and that the large numbers of available light tanks already deployed was enough and the Harry was canceled after 100 produced.  The remaining models were transferred to the RAF to be used as airfield defense.  The Mk. VIII chassis was also used for the Alecto series of vehicles that were mainly prototypes before war's end but since this is WWWII field those platoons and go get Jerry!
Date Introduced:  Harry Hopkins (Mid '43), Alecto I (Late '44), Alecto II (Late '44), Alecto III (Early '45), Alecto IV (Early '45) & Alecto Dozer (Early '45)
Users:  Commonwealth Nations.
Vehicle Chart:  We use the Tetrarch vehicle chart in the "Red Devils in the Night" supplement for the Harry Hopkins and then just modify it for use with the Alecto models where needed.
Crew:  Mk. VIII has a crew of 3 (commander, gunner & driver) and the Alecto models have crews of 4 (commander, gunner, loader and driver).

Riveted Construction:  The Mk. VIII has riveted construction and will suffer as such if struck at the appropriate locations by enemy fire.  Any non-penetrating hits to a location with rivets will force any crew that might be at that location to take an immediate D column hit.  Apply any effects as normal with the exception of any MC or Suppression results will be considered -1 action for the effected crewman for the remainder of the battle.  Apply what locations are covered by this rule via the WYSIWYG rules.
Wheeled Suspension:  Although fully tracked, the Mk. VIII and Alecto models cannot make 90-degree or 180-degree turns or make Dead Track maneuvers.  These vehicles will also suffer a +1 to all Bog Checks taken due to its unique suspension.
Commander As Loader:  The tank's commander acts as loader to the main gun in the Mk. VIII and thus cannot be exposed directing fire in the same action that is used to load.  Once loaded, the commander can direct fire while exposed in which will negate the No Commander penalty.
Little John Barrel Adapter:  The Little John barrel extension increases the 2pdr's velocity thus making it a bit more powerful.  All 2pdr AP rounds are increased to an AP of 22 to those vehicles fitted with this adapter.  The Availability of the Little John adapter is 15 for glider-borne units and 10 for all other units.
Alecto Models:  The Alecto I mounts a 3.75-inch howitzer that fires a HE, HEAT, WP and smoke shell.  Availability for WP shells is 14 with D10 shells available.  The Alecto II mounts a 6pdr that fires an AP, HE and canister round.   The canister shell is in essence a large shotgun shell that fires steel balls in a devastating short ranged pattern.  To fire this shell, just use the normal rules to fire the main gun and then place the 57mm Canister template 6" directly forward of the barrel and roll as normal for anything under the template.  Anything within the path of the 6" before the template is placed is considered to be hit with an A column hit.  Note that because the shell is in essence a shotgun shell, it can be used whilst on the move without the normal To Hit modifiers for moving whilst firing.  The Availability is 10 in the PTO and a 5 for all other theaters with D8 shells available.  The Alecto III mounts a 25pdr that fires a HE, smoke (normal and colored), star shell and chemical shells.  The Alecto IV is fitted with a 32pdr that only fires an AP round.  All guns have a 90-degree field of fire.
Open-Topped:  All Alecto models, except for the Dozer, are Open-Topped vehicles and will be bound by those rules as such.  The open crew compartment also allows a fully halted vehicle and full crew to reduce their Load time 1/2.
Tarpaulin Cover:  All Alecto models are equipped with tarps as basic kit.
Indirect Fire:  The Alecto I and III models may use indirect fire with the vehicle's howitzer.  The weapons have a minimum range of 45" and an unlimited maximum range when using indirect fire.
Alecto Dozer:  The Alecto Dozer is fitted with a hydraulic dozer blade used for various duties.  If a BM is present, let them decided the number of actions needed to push an obstacle clear.  If no BM is present then roll a D6 to see how many actions it will take the vehicle to clear an obstacle.  This also goes for dozing terrain like Bocage, woods or rubble.  The dozer will clear an area equal the width of the vehicle per action it moves through.  The Dozer can also be used as a makeshift mine clearing vehicle.  The dozer will automatically clear any anti-personnel mines but anti-tank mines can have a chance of destroying the blade when detonated.  When clearing an AT minefield roll a D20 for every action spent clearing the minefield and consult the chart below to see if the dozer is destroyed by the detonation.  If the blade is destroyed, the vehicle is immobilized for D20 actions while the crew detaches the blade from the vehicle.  Also roll an immediate Bog Check to see if the tracks are harmed by the explosion.  If passed detach the blade as noted but if failed the vehicle's tracks are destroyed and the vehicle is immobilized.  Note that when clearing any kind of minefield, the crew must be Buttoned-Up to do so.

AT Mine To Hit Chart
Speed     Hasty Mine Field     Improved Minefield     Tricky Minefield
1/2                    19                               18                         16
1/4                    20                               19                         17
The blade will also provide additional armor for the tank's front hull.  The dozer blade will cover HF 2-6 locations and will deflect incoming enemy fire but the location hit will be ruined by the incoming round.  Note that each location can only be hit once before it will no longer provide anymore cover.  If more then two dozer locations are ruined then the dozer will not be in working condition to perform any dozing actions.  Only rounds of 50mm or large will effect the dozer in this way.  When the blade is engaged, the vehicle's movement is halved.  The blade can be engaged at anytime with a free action by the driver.  Availability is a 10.
4" Smoke Dischargers:  The Mk. VIII has two sets of 4" smoke launchers fixed to either side of the turret loaded with smoke rounds.  The commander uses an action to fire the launchers in which both launchers fire a smoke round that will then smoke the front 180-degrees of the turret's front.  The launchers can only be reloaded externally and it will take a crewman one action to do so for each launcher.  If only one set is loaded and then fired, it will only produce a 90-degree smoke cloud to the front side of whatever launcher was fired.  Availability is 19 for all glider-borne unit's and a 15 for all other unit's.
Searchlight:  The Harry Hopkins has a fixed searchlight fitted in line with the main gun that will illuminate a path 12" wide and out to 35".
Glider-Borne:  The Mk. VIII and the Alecto models are all capable of being transported via the GAL.49 Hamilcar so the these vehicles can deploy from anywhere a glider can land from.
Carrier Wing Glider Project:  The Carrier Wing project was meant to allow vehicles to be transported like a glider with the addition of wings to the vehicle itself.  In reality, the project was ready to go but no armored vehicle was available for its use so the decision was made to just produce gliders large enough to transport these vehicles within its own fuselage.  But since this is Weird WWII I saw what the Hell so lets stick them wings on 'ol Harry and get that mother in the air.  The Mk. VIII is now air-transportable via this addition and may land on the tabletop like any other glider may.  Upon landing, it will take the crew two actions to detach the wings from the vehicle.  Once the wings are detached, the vehicle can act as normal.  Note, that the vehicle can be fired upon like any other aircraft.
Wargaming Piece:  I don't know of anyone who makes the Harry Hopkins or any of the Alecto models in 1/48 or 1/50 scale kits or die-cast toys so if you know of any let us know.