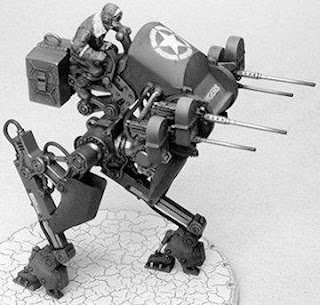 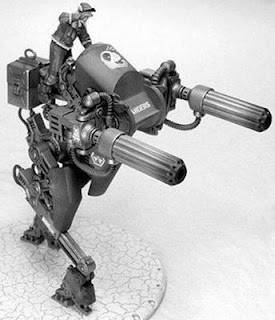 Notes:  The M1 is America's first AMW design and it shows it.  The design has many faults and was quickly withdrawn from front line duty.  M1 models are mostly found issued to the home front or used in instillation defense.
Date Introduced:  M1-A (Early '44) & M1-C (Mid '44)
Users:  U.S., Soviet Union & Commonwealth Nations
Vehicle Chart:  Don't have a vehicle chart for this so you'll have to wing it.
Crew:  Both models are crewed by a single crewman.
Open Crew Compartment:  M1 models have an open crew compartment and will only provide the crewman Partial Tank Cover from enemy fire coming from the vehicle's front.
Single Crewman:  Because the vehicle is manned by a single crewman, they will not suffer the No Commander penalty when firing.
Walker Type:  The M1 is considered a light W2 walker and will be bound by all appropriate rules as such.
Poor Foot Design:  The M1 walker suffers from a poorly designed foot and will suffer an additional +3 to all Bog Checks in rough terrain.
Prone to Tipping:  Both models are tall and relatively light which makes them prone to tipping over from enemy fire or uneven ground.  The walker will have an additional +2 to all tipping checks.
Quad .50cal:  Due to the configuration of the walker's weapons, the M1 will be bound by the Load Time for Arm & Shoulder Mounted Weapons from the AMW core rules.  The M1's weapon will roll 3 dice per working weapon per action and will roll each successful hit individually on the effects chart.  The crewman may only unjam a single Jam per action they are not performing another action.
2nd Generation Heat Cannon:  The heat cannon fires both barrels simultaneously at the same target and will then take 2 actions to recharge before it can fire again.  Note that the M1A1's heat cannon's elements can only fire a max of D6+4 shots before they are rendered useless.  Once burned out, the weapon will have to be re-fitted with new elements which must be done in the rear.  Follow all rules for 2nd generation heat cannons as usual.
Rear Echelon Deployment:  Due to the many flaws of the M1's design, most vehicles have been issued to rear area units, instillation defense and home front or state guard units.  The only nation that still uses these models on the front is the Soviet Union.  Availability for front line use is a 3 for any nation other then the Soviet Union.  Russian forces have no limitation on this model of AMW.
Wargaming Piece:  These rules are inspired by the 1/48 walker kits from the Dust Tactics board game by FFG.