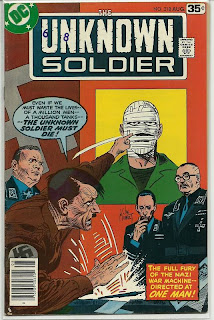 The Unknown Soldiers was an American covert operator and master of disguise that infiltrated the enemy so he was always at the right place at the right time during WWII.  He is the man making all the hard calls often within the enemy's own camp with no backup or support and getting the job done.  He is truly a one man army in which his wits, skill and initiative carries him through the toughest jobs!   This title is a must for any commando/spy fan set in the dark days of WWII.  DC gave the Unknown Soldier his own book when Star Spangled War Stories changed to The Unknown Soldier in issue 204 and lasted until he offed Hitler in issue 268.  The comic also featured shorts from other DC war characters and other war related works that were written and drawn by some of the industries best of the time.  I know DC put out some black and white TPBs of the Unknown Soldier so you can pick them up pretty easily cheap.  If you are a fan of any of the DC war titles of the day then you will love this no-faced bad ass as well.

Don't scratch and you won't give yourself away,
Brian
Posted by Weird WWII at 4:51 PM