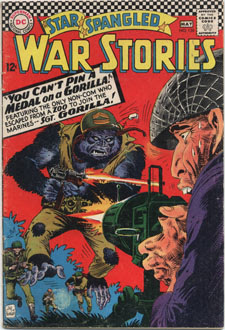 Star Spangled War Stories was an anthology war comic published by DC Comics from '52-'77.  The book would see many great WWWII characters in it including the US super spy Unknown Soldier, French resistance bad ass Mademoiselle Marie, the USMC's GI Robot, Allied commando team the Suicide Squad, WWI German fighter pilot Enemy Ace and the insanity that was The War That Time Forget were GIs and Japs alike battle each other along with tons of prehistoric nastiest on Dinosaur Island.  This book started out as a straight war anthology book but would later feature the above characters in ongoing stories.  The book would see a ton of the industries heavy weights as writers and artists over its long run and is really a great book with lots of history that would make an excellent addition to any WWWII fans collection.  I know DC has done some TPBs of various characters and story lines that were originally published in SSWS so swing down to your local comic shop and see what they got.

Get your dose of WWW,
Brian

PS
Swing here to read the excellent, "You Can't Pin A Medal On A Gorilla"!
Posted by Weird WWII at 12:28 PM