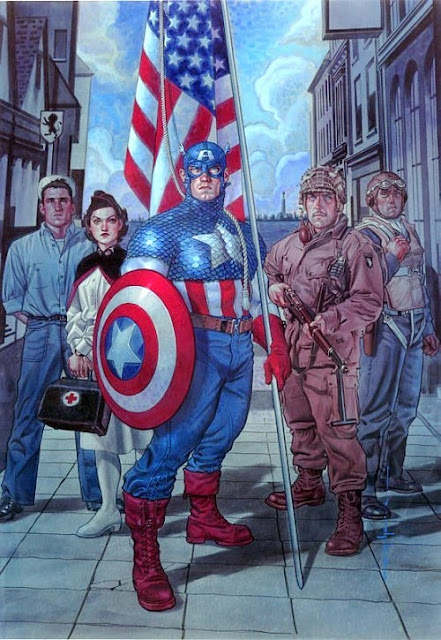 Origin: Captain America is America’s most iconic and patriotic costumed soldier of WWII. When it was discovered that he was too weak and frail to enter service, Steven Grant Rogers was recruited into a special military program called Project: Rebirth. After a grueling regiment of medical, mental, and physical experiments to determine if he was the perfect subject, Rogers was injected with the secret Super Soldier Serum created by Abraham Erskine. This serum enhanced Rogers’ weak body into the peak of human potential. After a Nazi spy assassinated Dr. Erskine, Rogers was to be the only super soldier created by his formula. Rogers then trained tirelessly to become America’s elite special operations operative, Captain America. Captain America was given a special indestructible shield, created by Dr. Myron MacLain, and a protective uniform that would embody America and its flag while fighting on the battlefield. Captain America is often accompanied by his young partner, Bucky, who joined him shortly before America’s introduction into the war. Captain America is a true sight to behold on the battlefield, causing G.I.s to follow him into the heart of the enemy, no matter the danger. At home he is the proud son of the American people who rally behind the cause and do what they must to see the job through. To this day, Captain America continues to fight the retreating Axis armies and can be found at the front where the battle is most fierce and vital to the Allies’ continued victory against the forces of fascism.

Name: Steven Grant Rogers
Rank: Captain, Special Field Agent
Nationality: United States of America
Military Affiliation: U.S. Army, O.S.S. & the All-Winners Squad
Base of Operations: Worldwide
Height: 6’ 2”
Weight: 240 lbs
Eyes: Blue
Hair: Blond
Actions: Cap has three actions per turn.
Senses: Due to Cap’s enhanced senses, he will receive a -1 column shift for any Sighting Checks and can hear up to double the normal range.
Strength: Captain America, while not super-human, represents the pinnacle of human physical potential. Cap can lift/press a maximum of 1300 lbs at a ¼ Skill Check, throw anything up to triple the normal range and has an AP of 1 with a +15 result on the Damage Table with his fists or feet. Cap will also receive a bonus of -1 to his final score when fighting in close combat because of his incredible strength.
Toughness: Due to his peak physique, Cap can withstand more damage than an ordinary person thus causing a +1 modifier to all damage taken. Cap also ignores the first two Heavy Wounds he receives and in addition will never take Morale Checks due to damage. Cap is subject to all normal human vulnerabilities, although his immunity to disease and poison is extraordinarily high so any chemical agents inhaled, absorbed, or swallowed will be at a +6 to its effect.
Movement: Cap is able to move 8”, run 12", crawl 4” and leap up to 10” per action. Cap may also move from a prone position to a standing position for free. He is able to leap 5” whilst moving for free. Cap can also swim at triple the normal rate and can hold his breath for D10+10 actions.
Training: Cap is an expert in all known military weapons and equipment as well as in various martial arts. He has developed his own unique style of acrobatic hand-to-hand combat technique that has yet to be copied. Because of his skill in close combat, Cap gets to roll four dice in close combat choosing the best for his final score. Due to Cap's training, he will ignore all Unqualified, Captured Use and Crew Served rules unless the technology is more advanced for the time or is alien or supernatural in nature. In fact, Cap may perform any action with a represented Skill Check no matter how impossible it might seem but all Commanders or the BM must agree to the Skill Check modifier before doing so. Rogers is an expert operator of all aircraft, boats and vehicles of the day and an exceptional motorcycle rider. Cap will receive a -2 to any checks while riding a motorcycle in addition to any other modifiers as normal.
Morale: Captain America is considered a 19-5 Legendary Leader ignoring all Gut Checks, Man Alone, Enemy Vehicle, Breaking Points and ignores all Suppression results unless within a blast. He will also never break or become a hero or coward. Cap has a Command Range of 25” to all U.S. units and 20” to any other Allied unit. In addition, any friendly model within 2” may use Cap’s Leadership Modifier on Morale-based tests. Due to Cap's leadership and sheer will to succeed, he will never surrender due to game mechanics but may choose to do so of his own free will.
Weapons & Equipment: The only equipment Captain America regularly carries is his shield and a Colt 1911 pistol and M1A1 Thompson SMG. However, he has been known to be equipped with standard U.S. weaponry and explosives when the mission warrants it. Cap is also a skilled motorcycle rider and is often issued one of U.S. or captured German type. Cap’s uniform is of heat resistant materials and of a new type of chain mail body armor that provides him with a degree of protection against flames, shrapnel and other impact damage causing an additional +1 to all damage taken.
Moral Fiber: Captain America is a very moral and just individual and takes that attitude onto the battlefield. Cap will always give Quarter to those who ask for it and will always protect civilians or wounded no matter their nationality. This rule must be strictly enforced by all Commanders and could be considered a weakness that can be easily manipulated by Cap’s enemies.
Protective: Cap is often accompanied by his partner Bucky on missions, and he is highly protective of his young friend. If Cap sees that Bucky is in dire peril or wounded, he will immediately race to his aid. If Bucky were to fall in battle, Cap could lose his morality and take vengeance on his partner's killer if he does not make a successful ½ Skill Check at the moment he realizes his partner has been killed. If failed, Cap will act under the Fanatic and No Quarter rules for those responsible only, for the remainder of the battle or until they have been killed by Cap's own hands.
Causing Terror in the Heart of His Enemies! Any enemy within 12" of Captain America must immediately make a Morale check. If passed, the enemy will fight on as normal but if failed they will immediately break per the normal rules. This goes for vehicle crews and any other piece that can be broken unless otherwise noted within their specific rules. 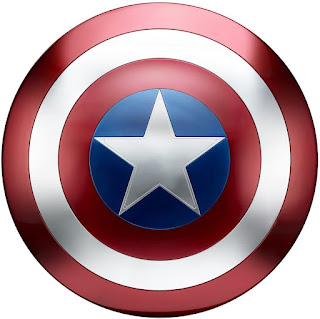 Captain America’s shield is a concave disk 2.5’ in diameter, weighing 12 pounds and made of the unique Vibranium-Adamantium alloy discovered by Dr. Myron MacLain. The shield has incredible aerodynamic properties that he uses as a projectile weapon. The special alloy is practically indestructible and offers Cap a protective shield against all weapons before him. The only way to damage the shield is by means of tampering with its molecular bonding on a sub-atomic level.
When Used as a Weapon: The shield may be thrown a maximum of 30” with a successful Skill Check. Single targets within 15" are auto hits. At a ½ Skill Check, the shield can return to Cap as long as its total traveling distance doesn’t surpass its 30” range. Cap's shield causes an E column hit to all targets hit. At a ¼ Skill Check, the shield can hit up to D6 different targets within its 30” range and still return. This rule cannot be used against targets that have dedicated armor plate for protection. If Cap fails any Skill Check in the situations listed above, he will only be able to throw his shield 15" at a single target without it returning. The shield has a penetration of 6 if used in close combat with a +5 modifier to the damage chart and a penetration of 2 if thrown with a +8 modifier. If thrown, the shield cannot return but is stuck in the armor of the target. It can be extracted at no penalty by Cap but anyone else who tries to free it will first have to pass a ¼ Skill Check to do so.
When Used for Protection: The shield provides Cap an additional +10 to all damage if it is in his possession at the time the damage was taken. The shield can reflect all weaponry except psionic attacks. If hit with a round of 37mm or larger, Cap will be knocked back D4”, 50mm D6”, 75mm D10”, 100mm D20” or 120mm+ D20+D10”. Cap must make a successful Skill Check to stay on his feet, but if the maximum distance is rolled then he will automatically end up prone as he gets knocked back. If knocked into a sturdy structure, Cap will take a D column hit as he slams into the structure. If he fails to be wounded, he will smash through the structure by the force of the attack if it is made of weak materials. Reinforced structures will cause a C column hit and will stop Cap at that point of contact.
Posted by Weird WWII at 6:56 PM