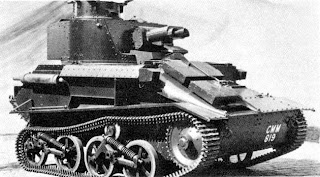 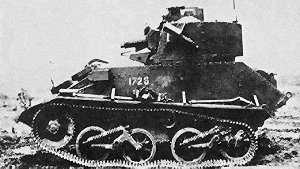 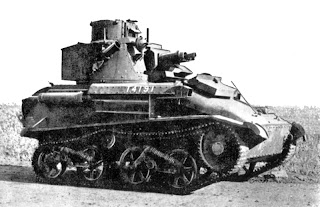 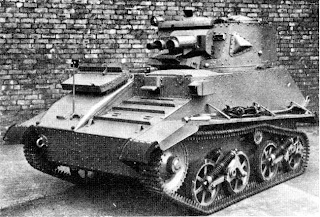 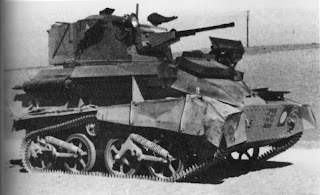 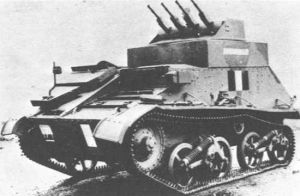 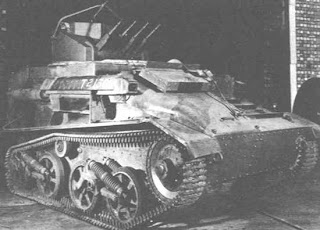 
Notes:  The Mk. VI was the Commonwealth's main light tank at the war's start and could be found on every front where Commonwealth troops were fighting.  It would quickly be proven to be way out of its league on the modern battlefield and would find itself as a training vehicle once the American's Stuart light tank was made available to Commonwealth forces in mass.
Date Introduced:  Mk. VI (Mid '36), Mk. VIA (Early '37), Mk. VIB (Early '38), Mk. VIB Indian Pattern (Mid '38), Mk. VIC (Mid '39) & both Light AA tank models (Early '40)
Users:  Commonwealth troops and India exclusively used the Mk. VIB Indian Pattern model.
Vehicle Chart:  We use the Mk. VI Light Tank vehicle chart from the Crusade for Empire supplement.
Crew:  3 (commander, gunner & driver)
Riveted Construction:  All models of the Mk. VI have riveted construction and will suffer as such if struck at the appropriate locations by enemy fire.  Any non-penetrating hits to a location with rivets will force any crew that might be at that location to take an immediate D column hit.  Apply any effects as normal with the exception of any MC or Suppression results will be considered -1 action for the effected crewman for the remainder of the battle.  Apply what locations are covered by this rule via the WYSIWYG rules.
Poor Cross-Country Mobility:  All Mk. VI models have poor cross-country performance and will be treated as a wheeled-vehicle when moving off-road.
4" Smoke Dischargers:  The Mk. VI has two sets of 4" smoke launchers fixed to either side of the turret loaded with smoke rounds.  The commander uses an action to fire the launchers in which both fire a smoke round that will then smoke the front 180-degrees of the turret's front.  The launchers can only be reloaded externally and it will take a crewman one action to do so for each of the two launchers.  If only one set is loaded and then fired, it will only produce a 90-degree smoke cloud to the front side of whatever launcher was fired.  Availability is 15 for all Mk. VIs.  The AA models are not provided with any smoke launchers.
Searchlight:  The Mk. VI has a small searchlight fitted to the right side of the turret next to the main gun.  The searchlight will shine forward of the turret whichever direction it is pointing and illuminates a 10" wide cone that extends out to 28".
Commander as Loader:  The commander acts as loader in both AA models of the Mk. V.  Because the main guns are machine guns, there is no No Commander penalties when firing.
Quad AA Model:  This model has a small turret armed with quad 7.92mm machine guns.  When firing, roll 4 To Hit dice per weapon and roll for location or result for each hit.  If a weapon Jams, only that weapon does allowing the others to fire as normal.  It takes a single action to clear one Jam result per weapon.  The quad weapon overworked the commander quite a bit thus causing the vehicle to Jam on a 18+.

Open-Topped:  Both AA models are all Open-Topped vehicles and will be bound by those rules as such.
Tarpaulin Cover:  All Open-Topped models are equipped with tarps as basic kit.
Home Guard Use:  The possibility of the Mk. VI to find its way into a British Home Guard unit is quite high thus the Availability is 10 for D4 vehicles of any model.
Mk. VIB Indian Pattern Model:  The Mk. VIB Indian Pattern was produced and used exclusively with Indian units.  The only difference between it and the normal Mk. VIB model is it is not fitted with a commander's cupola.
Wargaming Piece:  I am not aware of any 1/48 or 1/50 scale die-cast toys or model kits of any Mk. VIs so if you stumble across one let us know.