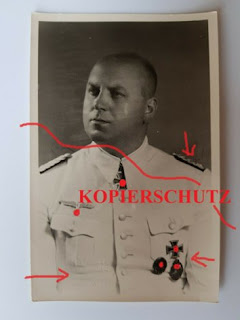 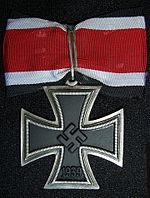 Franz Zejdlik
"On 20.07.1942 the Vorausabteilung of the 23. Panzer-Division (consisting of the division's Pionier-Bataillon, Kradschützen-Bataillon and a Panzerjäger Kompanie), under the command of Major Zejdlik, was ordered to cross the Don at Nikolayevskaya and secure a bridgehead over the river.  The town was reached at 1900 that day, though still defended by the Soviets.  They were cleared out during the night.
Shortly afterwards the Germans secured a 10-ton ferry intact, and using this as well as inflatable sacks, Zejdlik sent a company of motorcycle troops over the river against the Soviet positions there.  They were able to secure a weak bridgehead, which was strengthened during the night.  Zejdlik realized that creating a viable bridgehead here would only be possible if the 7 km distant towns of Karenchov and Worosoff were captured, due to the swampy terrain immediately adjacent to the river.  As such he decided to launch an attack on these positions at dawn with only part of his Vorausabteilung, despite the flank threat to the tenuous bridgehead.  The gamble payed off however and both towns were taken.  The following night the Soviets attempted to counterattack with tanks and infantry.  Zejdlik launched a counterattack against these forces, capturing or dispersing the infantry and destroying 6 tanks. Exploiting the confusion Zejdlik led his Kradschützen in pursuit, and they captured the 3 km distant village of Dolschowskaya.  By this action the security of the bridgehead was thus guaranteed.  During the battle to capture the bridgehead the following losses were inflicted on the Soviets...
- 2 officers and 680 men captured
- 220 enemy dead counted
- 7 field guns (6.62 cm)
- 6 AT guns
- 35 AT rifles
- 1 heavy machine gun
- numerous mortars
By this action Zejdlik far exceeded his original mission of forming a limited bridgehead over the Don, all the more remarkable due to his lack of experience in leading infantry formations.  This bridgehead would later be of great operational importance to both the division and the whole of the XXXX. Panzerkorps.  In addition to this act, in a subsequent battle Major Zejdlik distinguished himself further. Taking over the Panzergrenadier-Regiment 126 (whose commander had become a casualty), he led friendly forces to victory during a bitter battle to conquer a Soviet hilltop position.   1,000 prisoners, 6 field guns and numerous AT guns and rifles were captured."  from his Knight's Cross to the Iron Cross citation, awarded on October 4th, 1942 as Major of Panzer-Pionier-Bataillon 51.
Another capable enemy elite,
Brian & Mel
Posted by Weird WWII at 12:00 AM