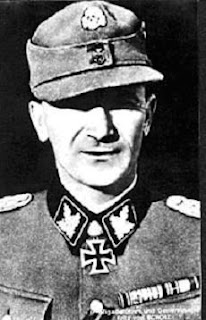 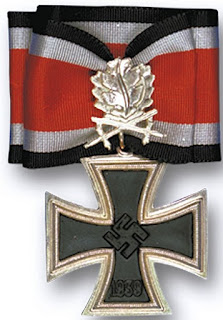 Fritz von Scholz
"For his performance during the heavy defensive battles at the Dnepropetrovsk bridgehead, in which his Regiment held a critical position, SS-Oberführer von Scholz was recommended for the Knight’s Cross and awarded the German Cross in Gold on the 29.11.1941."  from his Knight's Cross to the Iron Cross citation, awarded on 18 January 1942 as SS-Oberführer and commander of SS-Regiment "Nordland".
"During the fighting in the northern sector of the Eastern front from the 16.01.1944 to the present day, SS-Brigadeführer Fritz von Scholz has continuously done very well both as a divisional commander and an example of soldierly virtue for his men.  It fell to his Division to confront the overwhelming enemy forces advancing along the Kipen-Narva road and prevent them from reaching Narva itself.  In the course of these major battles there were ever-present crises, however they were mastered time and again by the personal intervention and example of the divisional commander.
1.) On the 28.01.1944 the enemy succeeded in breaking through the remnants of the 10. Luftwaffe-Feld-Division and the 61. Infanterie-Division, which were positioned south of the Kipen-Narva road on both sides of Osertizy.  Thereafter the Soviets continued advancing to the northwest and blocked the road near Gurlewo.  This created the danger that Kampfgruppe Lohmann (of the 11. SS-Freiw.Pz.Gren.Div. Nordland), positioned near Osertizy, and the elements of the 10. Luftwaffe-Feld-Division south of here (including its divisional staff) would be encircled by the enemy.  A nocturnal counter thrust, personally led by the divisional commander SS-Brigadeführer Fritz von Scholz from Ljalizy to Gurlewo, was about to take the road back under control.  The same counter thrust also threw the enemy back and opened up the way for the German troops to the east (including the divisional staff of the 10. Luftwaffe-Feld-Division) towards Ljalizy.
2.) On the 01.02.1944 the 11. SS-Freiw.Pz.Gren.Div. pulled back from Jamburg towards Dubrowka. However the pursuing enemy forces were faster on both the northern and southern sides of the road and these attacked those elements of the Division that were located along the road.  Fritz von Scholz was the soul of the resistance, recognizing that it was necessary to buy sufficient time for the westward moving remnants of the 61., 227. Infanterie and 10. Luftwaffe-Feld Divisionen to pull back across the Narva river.  Despite strong enemy assaults with tank support, the elements of the Division present here were able to rebuff an enemy night attack on top of the numerous attacks launched in up to regimental strength.  The bitter stands along both sides of Jamburg, Dubrowka and Komarowka, as well as the prolonged defense against overwhelming enemy forces in the strength of several divisions, brought decisive results.  These were the orderly occupation of the Narva bridgehead and the time necessary to assemble additional forces for the occupation of the northern Narva position.  The steadfastness of the troops and the firm leadership of the 11. SS-Freiw.Pz.Gren.Div. Nordland also bought additional time for the arrival of the Panzergrenadier-Division Feldherrnhalle and reinforcements for the 61., 227. Infanterie and 10. Luftwaffe-Feld Divisionen.  These divisions could be brought back across the Narva and integrated with their replacement troops in an orderly manner with the time that was won.  This accomplishment by SS-Brigadeführer Fritz von Scholz and his men created the preconditions for a viable defense along the Narva front.  It is no exaggeration to say that it was a decisive factor for this critical front.  The personal devotion to duty, toughness and example of SS-Brigadeführer Fritz von Scholz inspired his troops to give all that they had. He and his still young Division have shown themselves as shining examples of steadfastness."  from his Knight's Cross to the Iron Cross with Oak Leaves citation, awarded on 2 March 1944 as SS-Brigadeführer of the Waffen-SS and commander of the 11. SS-Freiwilligen-Panzergrenadier-Division "Nordland".
"On the 24.07.1944, following a two hour drum fire, the enemy attacked the sector of the Grenadier-Regiment 45 along both sides of the Lipsu road with tanks in support.  They achieved a break-in that was 1 km wide and 1 km deep.  More importantly, they secured a vital piece of high ground which would be crucial for a further advance.  Personally in the foremost line, SS-Gruppenführer von Scholz rallied the retreating soldiers, created a defensible line and thereby prevented a breakthrough.  After being provided the 4./SS-Panzer-Abteilung 11 from the general command, he personally launched a counterattack with this Kompanie and the 2./Pionier-Kompanie against the decisive high ground.  The counterattack managed to retake it and also bring the old German front line back under firm friendly control.
Result: The intended enemy breakthrough towards the Gulf of Finland, which would have cut off our soldiers fighting along the Narva river, was prevented.  The enemy 120th Rifle Division was badly bloodied and thus the conditions for the planned withdrawal of the III. SS-Panzer-Korps to the Tannenberg line were fulfilled.”  from his Knight's Cross to the Iron Cross with Oak Leaves and Swords citation, awarded on 8 August 1944 (posthumously) as SS-Gruppenführer of the Waffen-SS and commander of the 11. SS-Panzergrenadier-Division "Nordland".
Another capable enemy elite,
Brian & Mel
Posted by Weird WWII at 12:00 AM