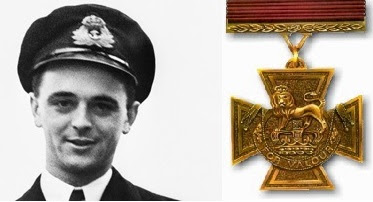 Ian Edward Fraser
"Lieutenant Fraser commanded His Majesty's Midget Submarine XE-3 in a successful attack on a Japanese heavy cruiser of the Atago class at her moorings in Johore Strait, Singapore, on 31st July, 1945.  During the long approach up the Singapore Straits XE-3 deliberately left the believed safe channel and entered mined waters to avoid suspected hydrophone posts.  The target was aground, or nearly aground, both fore and aft, and only under the midship portion was there just sufficient water for XE-3 to place herself under the cruiser.  For forty minutes XE-3 pushed her way along the seabed until finally Lieutenant Fraser managed to force her right under the center of the cruiser.  Here he placed the limpets and dropped his main side charge.  Great difficulty was experienced in extricating the craft after the attack had been completed, but finally XE-3 was clear, and commenced her long return journey out to sea.  The courage and determination of Lieutenant Fraser are beyond all praise.  Any man not possessed of his relentless determination to achieve his object in full, regardless of all consequences, would have dropped his side charge alongside the target instead of persisting until he had forced his submarine right under the cruiser.  The approach and withdrawal entailed a passage of 80 miles through water which had been mined by both the enemy and ourselves, past hydrophone positions, over loops and controlled minefields, and through an anti-submarine boom."
From Lt. Fraser's Victoria Cross citation, awarded on November 13, 1945.
May you be at peace,
Brian & Melonie 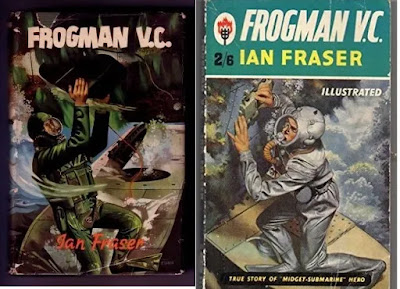