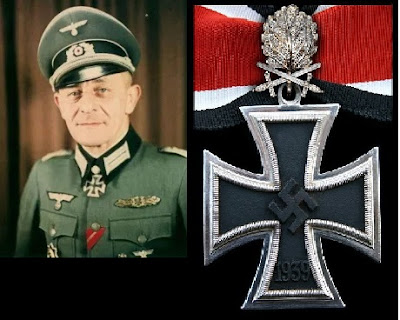 Karl Mauss
"On the night of October 6-7.1941, after the Panzer Abteilung had broken through to the highway, Oberstleutnant Mauss and his Bataillon captured the most important bridges and exits leading out of Vyazma.  He then personally cleared the city of the Soviets and created a provisional defensive position oriented towards the west with his weak forces.  By this action Dr. Mauss ensured that the Vyazma pocket could already be closed off to the south, and for this he was awarded the Knight’s Cross of the Iron Cross on November 26, 1941."
"Awarded for his leadership of major elements of the 4 Panzer Division throughout 1943.  He particularly distinguished himself at the start of the year, during which he played a major role in saving the VII Armee Korps from annihilation in February.  He later also contributed significantly to the attack of the 4 Panzer Division from Novgorod Sewerskij to Ssewsk, being particularly involved in the capture of Ssewsk itself.  This attack finally closed the gap between the 2 Armee and 2 Panzer Armee."  He was awarded the Oak Leaves to his Iron Cross of the Iron Cross on November 24, 1943.
"Awarded for his leadership of the 7 Panzer Division in 1944.  On the March 23, 1944 the Division was encircled at Satanowka.  Dr. Mauss took control of a group of Panthers belonging to the 1 SS Panzer Division, attacked towards the south and was able to make contact with the 1 Panzer Armee.  Later on the Division fought near Lida and in Lithuania, where it played a major role in hindering the Soviet advance towards Tilsit."  He was awarded Swards to his Knight's Cross to the Iron Cross on October 23, 1944.
"Awarded Diamonds to his Knight's Cross of the Iron Cross on April 15, 1945 for the following actions…
- The battles near Tryskiai - Telsche, south of Plunge (05-08.10.1944).
- The battles in the area Marienburg-Elbing (27.01.-10.02.1945).
- The heavy fighting near Konitz (12-15.02.1945) and Rummelsburg (from the 28.02.1945).
- Reaching the Gotenhafen bridgehead (08-11.03.1945).
- Defending the Gotenhafen bridgehead (12-23.03.1945).
- Defending the Oxhöfter Kämpe until being badly wounded on the 25.03.1945."
A truly capable enemy elite,
Brian
Posted by Weird WWII at 12:00 AM