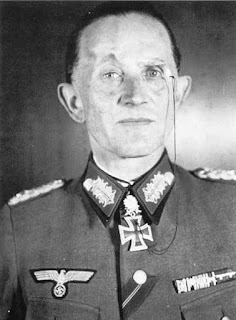 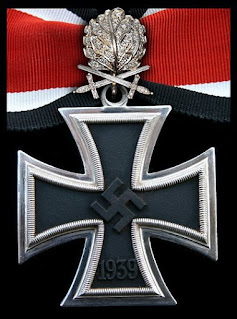 Dietrich Friedrich Eduard Kasimir von Saucken
"Awarded for his vigorous leadership of the Kampfgruppen Grolig and Lüttwitz during the winter of 1941/42.  On 28.12.1941 a vastly superior Soviet force broke into the German positions in the area around Blocknja, Bagrinow, Krivzowa and Chmelewaja.  This severely threatened the German Oka position. However after fierce fighting in the period 29.12.1941-02.01.1942 Saucken and the forces were able to crush the enemy forces and restore the situation to a stable state."  Awarded the Knight's Cross to the Iron Cross on January 6, 1942.
"Awarded for the performance of the 4. Panzer-Divison during Operation Kutuzov.  In the course of the battle the Division took over the defense of an area south of Orel at Jablonowez.  Saucken’s troops destroyed 62 enemy tanks, thus robbing the Soviets of the means to conduct a breakthrough and weakening them enough so that it was possible to push them back in a counterattack."  Awarded the Oak Leaves to his Knight's Cross of the Iron Cross on 22 August 1943.
"Awarded his Swords on 31 January 1944 for his Division’s success against the Soviets during the hard defensive battles around Gomel in late 1943."
"Awarded Diamonds on 8 May 1945 for his leadership and accomplishments throughout the war, with particular emphasis on his role in the battle for East Prussia during early 1945."
Another enemy elite,
Brian
Posted by Weird WWII at 12:00 AM