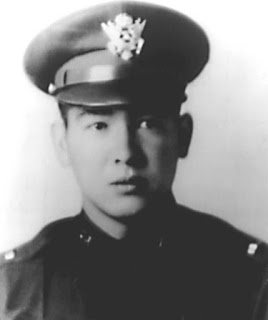 Francis Brown Wai
"Captain Francis B. Wai distinguished himself by extraordinary heroism in action, on 20 October 1944, in Leyte, Philippine Islands.  Captain Wai landed at Red Beach, Leyte, in the face of accurate, concentrated enemy fire from gun positions advantageously located in a palm grove bounded by submerged rice paddies.  Finding the first four waves of American soldiers leaderless, disorganized, and pinned down on the open beach, he immediately assumed command.  Issuing clear and concise orders, and disregarding heavy enemy machine gun and rifle fire, he began to move inland through the rice paddies without cover.  The men, inspired by his cool demeanor and heroic example, rose from their positions and followed him.  During the advance, Captain Wai repeatedly determined the locations of enemy strong points by deliberately exposing himself to draw their fire.  In leading an assault upon the last remaining Japanese pillbox in the area, he was killed by its occupants.  Captain Wai's courageous, aggressive leadership inspired the men, even after his death, to advance and destroy the enemy.  His intrepid and determined efforts were largely responsible for the rapidity with which the initial beachhead was secured.  Captain Wai's extraordinary heroism and devotion to duty are in keeping with the highest traditions of military service and reflect great credit on him, his unit, and the United States Army."
From Capt. Wai's Medal of Honor citation, awarded on June 20, 2000.
A true hero who's rightly honor, although delayed, had finally been recognized.
Brian & Melonie
Posted by Weird WWII at 12:05 AM