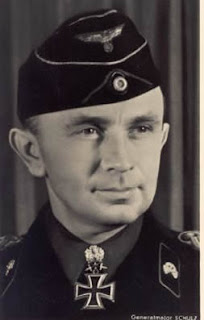 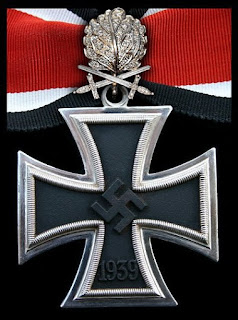 Adelbert Schulz
"Hauptmann Schulz led a company, and later a full battalion, of Panzers over a total of 17 armored attacks during the Western campaign, where he showed himself to be a fine commander of armor.  Over the course of the campaign he particularly distinguished himself on 14.05.1940 during the heavy fighting in the Dinant bridgehead, and later on 23.05.1940 where he helped resolve a critical combat situation near Hersin."  from his Knight's Cross to the Iron Cross citation, awarded on 29 September 1940.
"Awarded for distinguishing himself near Klin during the winter of 1941/1942.  Despite having only a handful of operational tanks, being outnumbered 8-1 and having to contend with -40 Celsius weather, he nevertheless was able to successfully cover the retreat of friendly German forces.  These included a full field hospital with over 4000 wounded men."  from his Knight's Cross to the Iron Cross with Oak Leaves citation, awarded on 31 December 1941.
"On 11.07.1943, during the attack of the 7. Panzer-Division in the southern sector of the battle of Kursk, Schulz was able to conduct a successful armored breakthrough south of Scheino.  Smashing through Soviet fieldworks, and in spite of enemy probes on all sides, he launched an armored pursuit with his Kampfgruppe and was able to catch a foot-bound Soviet group in the process of withdrawing. Schulz's men were able to capture almost 600 prisoners, 83 cannons and over 100 heavy machine guns and mortars.  In addition to this notable success, Schulz and his regiment were also able to destroy a total of 76 enemy tanks over the course of 11 days of battle in the attempted attack towards Kursk."  from his Knight's Cross to the Iron Cross with Oak Leaves and Swords citation, awarded on 6 August 1943.
"Awarded for the distinguished command of his Panzer-Regiment during the fluid battles around Kiev and Zhitomir in October/November 1943."  from his Knight's Cross to the Iron Cross with Oak Leaves, Swords and Diamonds citation, awarded on 14 December 1943.
Another capable enemy elite,
Brian
Posted by Weird WWII at 12:00 AM