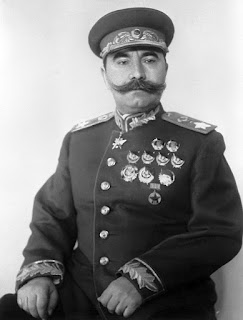 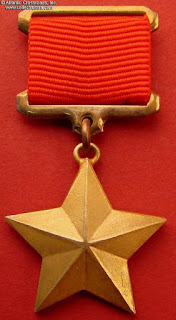 "Semyon Mikhailovich Budyonny was a Russian cavalryman, military commander during the Russian Civil War, Polish-Soviet War and World War II, and a close political ally of Soviet leader Joseph Stalin.  Budyonny was the founder of the Red Cavalry, which played an important role in the Bolshevik victory in the Russian Civil War.  As a political ally of Joseph Stalin, he was one of the two most senior army commanders still alive and in post at the time of German invasion of the USSR in 1941, but had to be removed from active service because of his unfitness to command a modern army.  Budyonny was later put in charge of the Reserve Front, then made Commander-in-Chief of the troops in the North Caucasus Direction, Commander of the North Caucasus Front - but was removed from this post as the German approached, and appointed Cavalry Inspector of the Red Army (from 1943), as well as various honorific posts.  Because of his exceptional civil war record, he continued to enjoy Stalin's patronage and suffered no real punishment for the disaster in Kiev.  After the war, he was appointed USSR Deputy Minister for Agriculture, responsible for horse breeding.  When he retired, he retained his membership of the Supreme Soviet and his status as a Hero of the Soviet Union.  After his death from a brain hemorrhage in 1973, aged 90, he was buried in the Kremlin wall with full military honors." 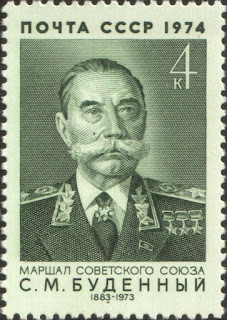