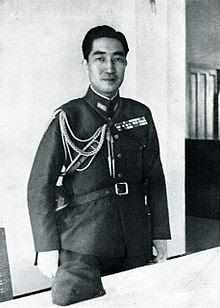 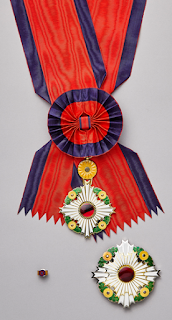 Tsuneyoshi Takeda
"Takeda was the second and last heir of the Takeda-no-miya collateral branch of the Japanese Imperial Family.  He then graduated from the 50th class of the Army War College in 1938 as the build-up to World War II was beginning.  He was promoted to the rank of major in August 1940, and attached to the Imperial Japanese Army General Staff in Tokyo, where he headed the Personnel Department.  He became lieutenant colonel in August 1943.  Author Sterling Seagrave contends that between 1940 and 1945 Prince Takeda oversaw the looting of gold and other precious items in China, Hong Kong, Vietnam, Laos, Cambodia, Burma, Malaya, Singapore, Sumatra, Java, Borneo and the Philippines. Seagrave says that most of this loot was stored in 175 vaults located in the Philippines, and that considerable amounts have since been recovered by former Philippine President Ferdinand Marcos and others.  Prince Takeda held executive responsibilities over Unit 731 in his role as chief financial officer of the Kwantung Army.  Unit 731 conducted biological weapons research on human subjects with a variety of bacterial cultures and viruses during World War II.  According to Daniel Barenblatt, Takeda received, with Prince Mikasa, a special screening by Shirō Ishii of a film showing imperial planes loading germ bombs for bubonic plague dissemination over the Chinese city of Ningbo in 1940. Moreover, historian Hal Gold has alleged in his work "Unit 731 Testimony" that Prince Takeda had a more active role as "Lieutenant Colonel Miyata" – an officer in the Strategic Section of the Operations Division. Gold reports the testimony of a veteran of the Youth Corps of this unit, who testified in July 1994 in Morioka during a traveling exhibition on Shirō Ishii's experiments, that Takeda watched while outside poison gas tests were made on thirty prisoners near Anda. After the war, a staff photographer also recalled the day the Prince visited Unit 731's facility at Pingfang, Manchukuo and had his picture taken at the gates.  Prince Takeda briefly served as the emperor's personal liaison to the Saigon headquarters of Field Marshal Terauchi Hisaichi, commander of the Southern Expeditionary Army Group.  During that assignment, he observed first-hand the desperate conditions of the Japanese forces at Rabaul, Guadalcanal, and in Luzon. After his return, he was then assigned to the Kwantung Army headquarters.  After Emperor Shōwa's radio address announcing the surrender of Japan on 15 August 1945, he went to Shinkyo in Manchukuo to ensure the Kwantung Army's compliance with the surrender orders."

A truly vile enemy elite,
Brian
Posted by Weird WWII at 5:44 AM