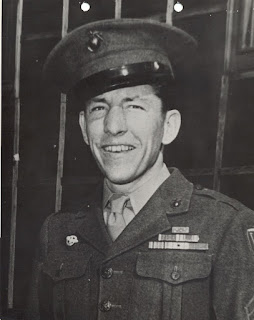 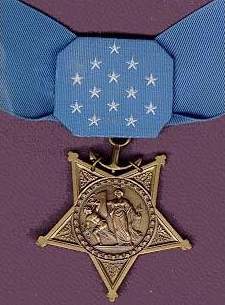 "For conspicuous gallantry and intrepidity at the risk of his life above and beyond the call of duty as Leader of an Assault Group, serving with the First Battalion, Twenty-Eight Marines, Fifth Marine Division, during hand- to-hand combat with enemy Japanese at Iwo Jima, Volcano Islands, on March 3, 1945.  Standing watch alternately with another Marine in a terrain studded with caves and ravines, Sergeant Harrell was holding a position in a perimeter defense around the company command post when Japanese troops infiltrated our lines in the early hours of dawn.   Awakened by a sudden attack, he quickly opened fire with his carbine and killed two of the enemy as they emerged from a ravine in the light of a star-shell burst.  Unmindful of his danger as hostile grenades fell closer, he waged a fierce lone battle until an exploding missile tore off his left hand and fractured his thigh; he was attempting to reload the carbine when his companion returned from the command post with another weapon.  Wounded again by a Japanese who rushed the foxhole wielding a saber in the darkness, Sergeant Harrell succeeded in drawing his pistol and killing his opponent and then ordered his wounded companion to a place of safety.  Exhausted by profuse bleeding but still unbeaten, he fearlessly met the challenge of two more enemy troops who charged his position and placed a grenade near his head.  Killing one man with his pistol, he grasped the sputtering grenade with his good right hand and, pushing it painfully toward the crouching soldier, saw his remaining assailant destroyed but his own hand severed in the explosion.  At dawn Sergeant Harrell was evacuated from a position hedged by the bodies of twelve dead Japanese, at least five of whom he had personally destroyed in his self-sacrificing defense of the command post.  His grim fortitude exceptional valor and indomitable fighting spirit against almost insurmountable odds reflect the highest credit upon himself and enhance the finest traditions of the United States Naval Service."

From Sgt. Harrell's Medal of Honor citation, awarded on October 5, 1945.

May you be at peace,
Brian & Melonie
Posted by Weird WWII at 7:11 AM