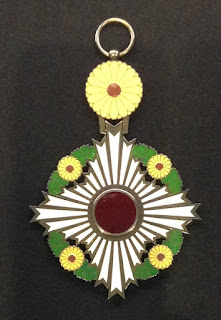 Prince Nashimoto Morimasa was born in Kyoto and was the uncle-in-law of Emperor Shōwa, an uncle of his consort, Empress Kōjun, and the father-in-law of Crown Prince Euimin of Korea.  Like most of the royal family, Nashioto chose a military career and would graduate from the Imperial Japanese Army Academy, and he received a commission as a second lieutenant in the IJA 39th Infantry Regiment in 1899.  The Prince would attend the École Spéciale Militaire de Saint-Cyr at St. Cyr, France for several years until he was called back to Japan for good in 1909.  Rising through the ranks, the Prince would become a lieutenant general and commander of the IJA 16th Division in August 1917.  Prince Nashimoto became a member of the Imperial Japanese Army General Staff in November 1919 and was promoted to the rank of general in August 1922.  On 8 August 1932, he was given the largely honorary rank of field marshal and became a member of the Board of Marshals and Fleet Admirals.  In October 1937, he became chief priest of the Ise Shrine and gave up on his military career but held many civilian titles.   Morimasa would find himself arrested after the Japanese surrender for manly political reasons as he preformed no military functions during the war.  He was then released and stripped of all his nobility and would die in relative poverty and obscurity in 1951.

Another honorary enemy elite that would find themselves adversely affected by their own people's lust for war.
Brian & Melonie