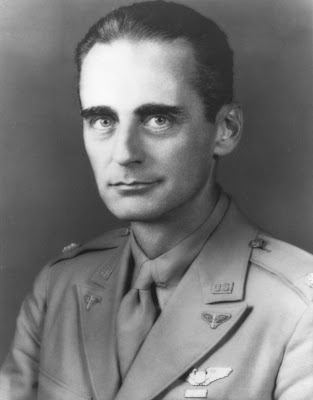 
"The President of the United States of America, in the name of Congress, takes pleasure in presenting the Medal of Honor to Major (Air Corps) Pierpont Morgan Hamilton, United States Army Air Forces, for conspicuous gallantry and intrepidity in action above and beyond the call of duty while serving as the Assistant Chief of Staff for Intelligence, Western Task Force, in North Africa during the landings of Operation Torch.  On 8 November 1942, near Port Lyautey, French Morocco, Lieutenant Colonel Hamilton volunteered to accompany Colonel Demas Craw on a dangerous mission to the French commander, designed to bring about a cessation of hostilities.  Driven away from the mouth of the Sebou River by heavy shelling from all sides, the landing boat was finally beached at Mehdia Plage despite continuous machinegun fire from three low-flying hostile planes.  Driven in a light truck toward French headquarters, this courageous mission encountered intermittent firing, and as it neared Port Lyautey a heavy burst of machinegun fire was delivered upon the truck from pointblank range, killing Colonel Craw instantly.  Although captured immediately, after this incident, Lieutenant Colonel Hamilton completed the mission."