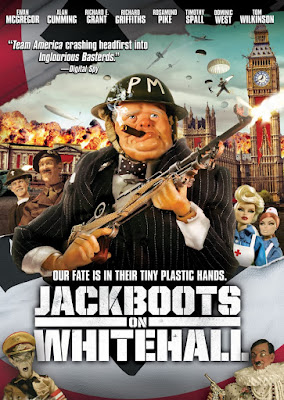 "In 1940, Nazi Germany invades Great Britain by drilling under the English Channel and up through the cobblestones on Whitehall. In London, from his bunker under Downing Street, Prime Minister Winston Churchill issues a call to arms for all of Britain to band together to resist the invaders. In a small village, Chris, a young everyman, rallies the residents to fight back. Joining forces with Churchill's small group of soldiers, the resistance movement retreats to Hadrian's Wall, where the unlikely saviours of the country come from the Scottish Highlands."  Now this flick was a lot of fun!  Give the trailer below and check out the madness!