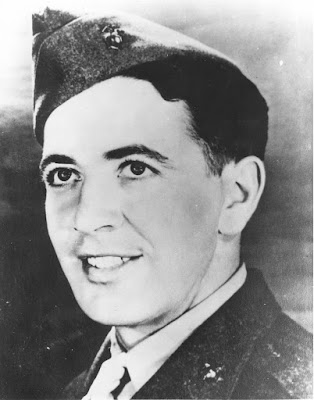 "For conspicuous gallantry and intrepidity at the risk of his life above and beyond the call of duty as a rifleman with Company K, Third Battalion, First Marines, First Marine Division, in action against enemy Japanese forces on Okinawa Shima in the Ryūkyū Chain, May 2, 1945.  Dug in with another Marine on the point of the perimeter defense after waging a furious assault against a strongly fortified Japanese position, Private First Class Foster and comrade engaged in a fierce hand grenade duel with infiltrating enemy soldiers.  Suddenly an enemy grenade landed beyond reach in the foxhole.  Instantly diving on the deadly missile, Private First Class Foster absorbed the exploding charge in his own body, thereby protecting the other Marine from serious injury.  Although mortally wounded as a result of his heroic action, he quickly rallied, handed his own remaining two grenades to his comrade and said, "Make them count."  Stouthearted and indomitable, he had unhesitatingly relinquished his own chance of survival that his fellow Marine might carry on the relentless fight against a fanatic enemy, and his dauntless determination, cool decision and valiant spirit of self-sacrifice in the face of certain death reflect the highest credit upon Private First Class Foster and in the United States Naval Service.  He gallantly gave his life in the service of his country."

From PFC Foster's Medal of Honor citation, awarded on August 19, 1946. 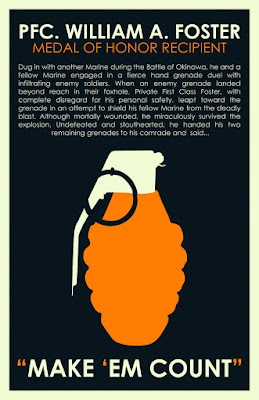 Thank you for your service and may you be at peace,
Brian
Posted by Weird WWII at 6:49 AM