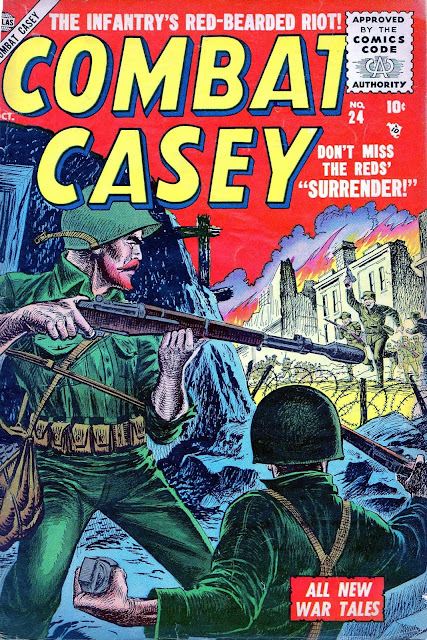 "Formerly War Combat, Combat Casey was a rather crude and violent war comic set during the Korean War, churned out by Atlas during the 1950s under their “Sports Action” imprint.  Casey is a rough-and-ready fighting machine with a fierce red goatee.  With no fear and even less doubt, he leads his squad into blistering fire fights behind enemy lines.  Casey’s bravado is counterbalanced by his compatriot Penny P. Pennington, an intellectual (how do we know? It’s the glasses, of course!) private who uses his smarts to get himself and Casey out of tough spots.  Each issue of Combat Casey features two bloody bust-em-up stories of Casey and his crew, and a filler story highlighting some aspect of life in the military."  That review pretty much sums it up so read all the wartime actions here!