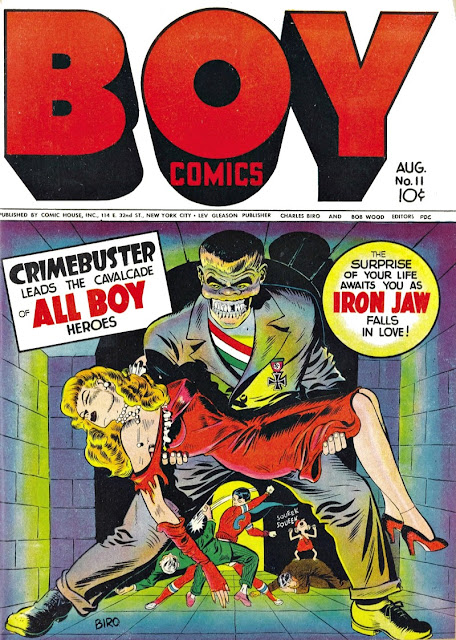 "Product of quality-conscious Lev Gleason Publications and a classic “sleeper” title from the Golden Age, Boy Comics featured the electrifying storytelling skills of Charles Biro and the adventures of Crimebuster, a charismatic and interesting boy hero.  For the first several years of Boy Comics, Crimebuster was locked in battle with the terrifying Nazi villain Iron Jaw, perhaps the most evil and hateful character of the entire Golden Age.  Young Crimebuster and his pet monkey Squeeks often suffered horribly at the hands of Iron Jaw before eventually prevailing in issue #14.  Boy Comics lost some of its edge after the death of its primary antagonist, but Crimebuster and Squeeks soldiered on against the minions of the underworld into the 1950s.  Backup features included Dilly Duncan, Rocky X, Young Robin Hood, and Bombshell."  Check out these golden-aged treasures here.

Some Golden-Aged goodness,
Brian
Posted by Weird WWII at 1:41 AM