Ed is getting weird again!! 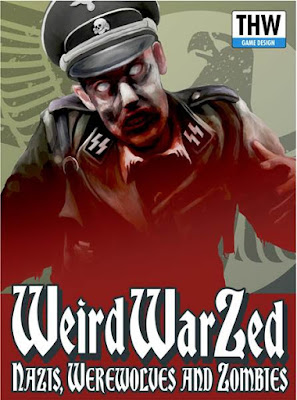 "It’s late in the war and things are not going well for Germany.  Hitler has seen the reports, the increasing casualties, the displeasure at home, and always the gains being made by the Allies.

In desperation he has turned to herr Doktor.  Once a ludicrous idea has now become, in der Fuehrer’s mind, his last hope to turn the tide and achieve victory.

What is Project Hölle auf Erden?  Simply put, it is the reanimation of the dead and more.  Not the undead that would randomly wreak havoc on the world, but a controlled force led by the minions of der Fuehrer.  However; exactly how much control is debatable and yet to be seen.

And we’re not even talking about the Werewolves…"

My pals over at Two Hour Wargames are taking it to the weird again!  Can't wait to see what they come up with!

Brian
Posted by Weird WWII at 9:09 AM