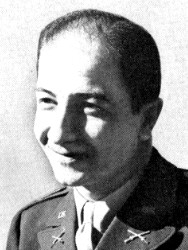 "For conspicuous gallantry and intrepidity at risk of life above and beyond the call of duty on May 23, 1944, in the vicinity of Cisterna, Italy.  2d Lt. Dervishian (then Tech. Sgt.) and 4 members of his platoon found themselves far ahead of their company after an aggressive advance in the face of enemy artillery and sniper fire.  Approaching a railroad embankment, they observed a force of German soldiers hiding in dugouts.  2d Lt. Dervishian, directing his men to cover him, boldly moved forward and firing his carbine forced 10 Germans to surrender.  His men then advanced and captured 15 more Germans occupying adjacent dugouts.  The prisoners were returned to the rear to be picked up by advancing units.  From the railroad embankment, 2d Lt. Dervishian and his men then observed 9 Germans who were fleeing across a ridge.  He and his men opened fire and 3 of the enemy were wounded.  As his men were firing, 2d Lt. Dervishian, unnoticed, fearlessly dashed forward alone and captured all of the fleeing enemy before his companions joined him on the ridge.  At this point 4 other men joined 2d Lt. Dervishian's group.  An attempt was made to send the 4 newly arrived men along the left flank of a large, dense vineyard that lay ahead, but murderous machine gun fire forced them back.  Deploying his men, 2d Lt. Dervishian moved to the front of his group and led the advance into the vineyard.  He and his men suddenly became pinned down by a machine gun firing at them at a distance of 15 yards.  Feigning death while the hostile weapon blazed away at him, 2d Lt. Dervishian assaulted the position during a halt in the firing, using a hand grenade and carbine fire, and forced the 4 German crew members to surrender.  The 4 men on the left flank were now ordered to enter the vineyard but encountered machine gun fire which killed 1 soldier and wounded another.   At this moment the enemy intensified the fight by throwing potato-masher grenades at the valiant band of American soldiers within the vineyard.  2d Lt. Dervishian ordered his men to withdraw; but instead of following, jumped into the machine gun position he had just captured and opened fire with the enemy weapon in the direction of the second hostile machine gun nest.  Observing movement in a dugout 2 or 3 yards to the rear, 2d Lt. Dervishian seized a machine pistol.  Simultaneously blazing away at the entrance to the dugout to prevent its occupants from firing and firing his machine gun at the other German nest, he forced 5 Germans in each position to surrender.  Determined to rid the area of all Germans, 2d Lt. Dervishian continued his advance alone.  Noticing another machine gun position beside a house, he picked up an abandoned machine pistol and forced 6 more Germans to surrender by spraying their position with fire.  Unable to locate additional targets in the vicinity, 2d Lt. Dervishian conducted these prisoners to the rear.  The prodigious courage and combat skill exhibited by 2d Lt. Dervishian are exemplary of the finest traditions of the U.S. Armed Forces."