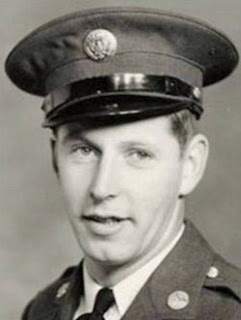 "For conspicuous gallantry and intrepidity at the risk of life, above and beyond the call of duty, on 11 July 1943 at Favoratta, Sicily.  2d Lt. Craig voluntarily undertook the perilous task of locating and destroying a hidden enemy machine gun which had halted the advance of his company.  Attempts by 3 other officers to locate the weapon had resulted in failure, with each officer receiving wounds.  2d Lt. Craig located the gun and snaked his way to a point within 35 yards of the hostile position before being discovered.  Charging headlong into the furious automatic fire, he reached the gun, stood over it, and killed the 3 crew members with his carbine.  With this obstacle removed, his company continued its advance.  Shortly thereafter while advancing down the forward slope of a ridge, 2d Lt. Craig and his platoon, in a position devoid of cover and concealment, encountered the fire of approximately 100 enemy soldiers.  Electing to sacrifice himself so that his platoon might carry on the battle, he ordered his men to withdraw to the cover of the crest while he drew the enemy fire to himself.  With no hope of survival, he charged toward the enemy until he was within 25 yards of them.  Assuming a kneeling position, he killed 5 and wounded 3 enemy soldiers.  While the hostile force concentrated fire on him, his platoon reached the cover of the crest.  2d Lt. Craig was killed by enemy fire, but his intrepid action so inspired his men that they drove the enemy from the area, inflicting heavy casualties on the hostile force."