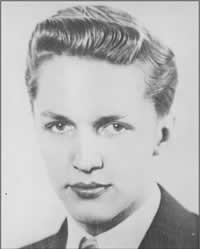 Richard Eller Cowan
"He was a heavy machine gunner in a section attached to Company I in the vicinity of Krinkelter Wald, Belgium, 17 December 1944, when that company was attacked by a numerically superior force of German infantry and tanks.  The first 6 waves of hostile infantrymen were repulsed with heavy casualties, but a seventh drive with tanks killed or wounded all but 3 of his section, leaving Pvt. Cowan to man his gun, supported by only 15 to 20 riflemen of Company I.  He maintained his position, holding off the Germans until the rest of the shattered force had set up a new line along a firebreak.  Then, unaided, he moved his machine gun and ammunition to the second position.  At the approach of a Royal Tiger tank, he held his fire until about 80 enemy infantrymen supporting the tank appeared at a distance of about 150 yards.  His first burst killed or wounded about half of these infantrymen.  His position was rocked by an 88mm shell when the tank opened fire, but he continued to man his gun, pouring deadly fire into the Germans when they again advanced.  He was barely missed by another shell.  Fire from three machine guns and innumerable small arms struck all about him; an enemy rocket shook him badly, but did not drive him from his gun.  Infiltration by the enemy had by this time made the position untenable, and the order was given to withdraw. Pvt. Cowan was the last man to leave, voluntarily covering the withdrawal of his remaining comrades.  His heroic actions were entirely responsible for allowing the remaining men to retire successfully from the scene of their last-ditch stand."

Thank you for your service and may you be at peace,
Brian
Posted by Weird WWII at 7:00 AM