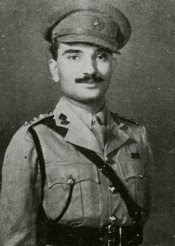 "For most conspicuous gallantry on active service in the Middle East.  During the pursuit of the enemy following the capture of Metemma on the night 31 January – 1 February 1941, Second-Lieutenant Bhagat was in command of a section of a Field Company, Sappers and Miners, detailed to accompany the leading mobile troops (Bren Carriers) to clear the road and adjacent areas of mines.  For a period of four days and over a distance of 55 miles this officer in the leading carrier led the Column.  During this period, he himself detected and personally supervised the clearing of no less than 15 minefields of varying dimensions.  Speed being essential, he worked at high pressure from dawn to dusk each day.  On two occasions when his carrier was blown up with casualties to others, and on a third occasion when ambushed and under close enemy fire he himself carried straight on with his task.  He refused relief when worn out with strain and fatigue and with one eardrum punctured by an explosion, on the grounds that he was now better qualified to continue his task to the end.  His coolness, persistence over a period of 96 hours, and gallantry, not only in battle, but throughout the long period when the safety of the Column and the speed at which it could advance were dependent on his personal efforts, were of the highest order."

Thank you for your service and may you be at peace,
Brian
Posted by Weird WWII at 7:38 AM