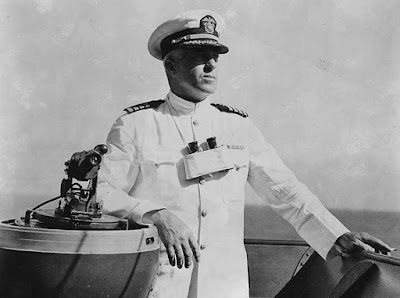 "For extraordinary heroism and conspicuous intrepidity above and beyond the call of duty during action against enemy Japanese forces off Savo Island on the night of 12–13 November 1942.  Although out-balanced in strength and numbers by a desperate and determined enemy, Rear Admiral Callaghan, with ingenious tactical skill and superb coordination of the units under his command, led his forces into battle against tremendous odds, thereby contributing decisively to the rout of a powerful invasion fleet and to the consequent frustration of a formidable Japanese offensive.  While faithfully directing close-range operations in the face of furious bombardment by superior enemy fire power, he was killed on the bridge of his Flagship.  His courageous initiative, inspiring leadership, and judicious foresight in a crisis of grave responsibility were in keeping with the finest traditions of the United States Naval Service.  He gallantly gave his life in the defense of his country."

From RDML Callaghan's Medal of Honor citation, awarded in 1943.

Thank you for your service and may you be at peace,
Brian
Posted by Weird WWII at 8:29 AM