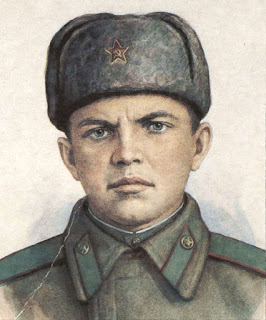 On February 22 1943, Matrosov's unit was tasked with taking out a line of German machine gun bunkers near the village of Chernushki.  Two bunkers were dispatched with heavy casualties and the third was about to open fire on the assault unit when Matrosov leaped in front of the enemy weapon and used his own body to shield his comrades from the enemy fire.  The assault section was able to reach and destroy the enemy position only due to Matrosov's sacrifice.  Matrosov's sacrifice would resonate throughout the Soviet Union and his selfless duty to his homeland was awarded with the Hero of the Soviet Union medal.  This lowly private's deeds would become one of the most celebrated stories of bravery during WWII for the Soviet people.

A true hero in the defense of his people!
Brian 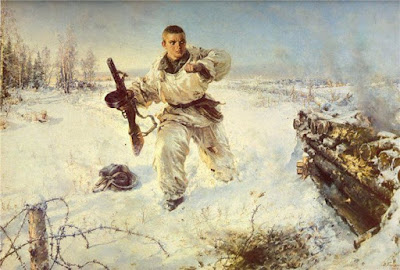 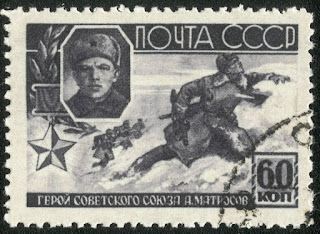 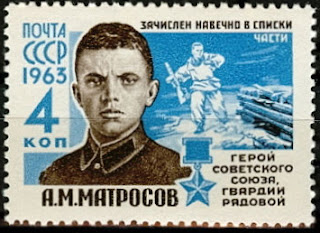 Memorial to the Heroes of the Soviet Union statue with Matrosov's likeness.

On 27 of February 1943, in the battle for the village of Chernushki near Pskov battalion was given a command to attack enemy in the village, three German machine-guns fire the infantry from pill-boxes. Solders managed to damage two of them. Matrosov was given a combat mission to detonate the rest one. He got to the pill-box and threw the grenade into it. The unit began the attack but machine-gun started again the Matrosov threw himself onto a pill-box, blocking the machine-gun with his own body, to allow his unit to advance. Matrosov was not the only man who did that. About 300 people are known to do the same. But his act became well known because of the army reporter of that battalion. For his self-sacrifice in battle, Matrosov was posthumously awarded the distinction Hero of the Soviet Union. Matrosov is one of the most famous heroes of the World War II. - See more at: http://www.russia-ic.com/ppl_articles/in_depth/901/#.Vqb1e1LffIW
Posted by Weird WWII at 11:18 AM